Adapted from a video by Tim Dodd, web-version by Alex Crouch.

On November 2nd, 2019, Northrop Grumman performed a spaceflight first and launched an oven aboard their Cygnus Cargo Ship. The craft, on route to the ISS, contained just over 3,700 kg of scientific experiments, hardware, and crew supplies. The zero-g oven, developed by Nanoracks, will be used to bake the first food in space: the DoubleTree cookie.

So today, I thought we should do a history of space food, and figure out why we haven’t yet baked anything in space. Meanwhile learning from the experts on how DoubleTree by Hilton, the sponsor of this content, will bake their cookies on the ISS.

Space food has been around since the dawn of human spaceflight, which began with the first human in space, Yuri Gagarin. Throughout the early ’60s, the Mercury, Vostok, Voskhod, and early Soyuz programs stuck with ‘baby food,’ which was unanimously considered awful.

The initial U.S. crewed missions didn’t even bother with in-flight snacks due to their short, suborbital flights lasting approximately 15 minutes. However, space food became more of a necessity once orbital flights began.

The first U.S. astronaut to reach orbit, John Glenn, spent 5 hours in space. He ate applesauce, puréed beef, and vegetables; however, he opted to avoid eating spaghetti in a tube (which we can only imagine tastes about as appealing as it sounds). Likewise, the Soviet cosmonauts ate from simplistic, toothpaste-like tubes that contained pureed meat and chocolate sauce.

It wasn’t until the United States Gemini program that space food became more extravagant. The first crewed launch of the program, Gemini 3, presented an opportunity for NASA to try out their new menu. The novel menu included a variety of foods such as shrimp cocktail, chicken, vegetables, toast squares, butterscotch pudding, and apple juice. All of which were either dehydrated or in gelatin coatings.

NASA was excited to study the astronauts’ health and gain feedback on their newly developed menu. Therefore, you can imagine their shock when they discovered that the pilot, John Young, had smuggled a contraband corned beef sandwich aboard. He later offered it to Commander Grissom, and by doing so, created a small scandal.

Grissom took one bite of the sandwich and immediately stowed it away, as bits began to float around the cabin (which is considered to be dangerous, as crumbs can interfere with critical equipment and pose a risk if aspirated).

The nefarious deed resulted in a comical congressional hearing, and a prompt slapping of both astronaut’s wrists. Young reminisces upon the outcome of these events in his 2012 memoir, aptly named “Forever Young.”

With the Apollo program, NASA iterated on its food offerings to make them more appealing, appetizing, and nutritious. They introduced hot water for re-hydrating freeze-dried foods and developed a spoon-bowl, which enabled more normal eating practices in micro-gravity.

During this time, the Apollo-Soyuz mission was conducted, which famously saw the two Cold War rivals unify over a common goal of spaceflight. The Soyuz 19 crew exchanged food such as canned beef tongue, Riga bread, and tubes of beet soup, along with caviar.

The beet soup was even labelled Vodka as a joke to the unsuspecting American crew! This historic joint mission presented a unique opportunity for the astronauts to flavour each other’s food, culture, and offered a glimpse of what life was like on the other side of the Iron Curtain.

The next great leap in space food was during the Skylab program. Which because of its larger living area, facilitated a fridge and a freezer. The inclusion of which allowed for new menu items such as butter cookies, lobster Newberg, fresh bread (it should be noted, the fresh bread wasn’t freshly baked bread, simply not freeze-dried), and even ice cream.

These advancements mainly carried over to the Space Shuttle, which introduced what, to some extent, may be considered an oven. However, it was only capable of heating up to temperatures of 82 degrees Celsius. It was subsequently more of a food warmer than an oven.

For the most part, the way food was prepared on the Shuttle is the same as the International Space Station. Perishables such as food don’t last very long, and therefore, the ISS is replenished by resupply vehicles that deliver experiments, supplies, and surprises at regular intervals.

In 2015, one of such surprises – an espresso machine – was delivered to the ISS by the Italian Space Agency. The device, astutely named ISSPresso, enabled astronauts to brew their espressos on orbit. Sadly, the “Coffee in Space” mission ended in 2017.

Where will the oven go?

To understand where the new oven will be installed, I spoke with the Senior Associate Program Scientist for the ISS U.S. National Laboratory (a lengthy title), Liz Warren.

The zero-G oven will be stowed in an overhead rack in the Destiny module (the U.S. lab). The orientation, of course, doesn’t matter as there is no up or down in micro-gravity. The same rack features a portable water dispenser, which the astronauts use to fill up their drink bags and re-hydrate freeze-dried foods.

If the future holds space hotels, they better have some excellent culinary experiences for their customers.

As Liz put it, “we need to test that oven, and the space station is a tremendous testbed for innovative ideas, and that’s part of the reason why we’re doing this.”

Once I got a good sense of where the oven will go and its significance, I went down the road to NanoRacks.

How is a space oven different?

Conventional ovens work on the principle of convection, in which, hot air becomes more buoyant and floats to the top of an air mass. By doing so, it displaces cooler air that fills in the space below, establishing a cycle. This poses a challenge because no such convective cycle can occur in the microgravity of orbit. 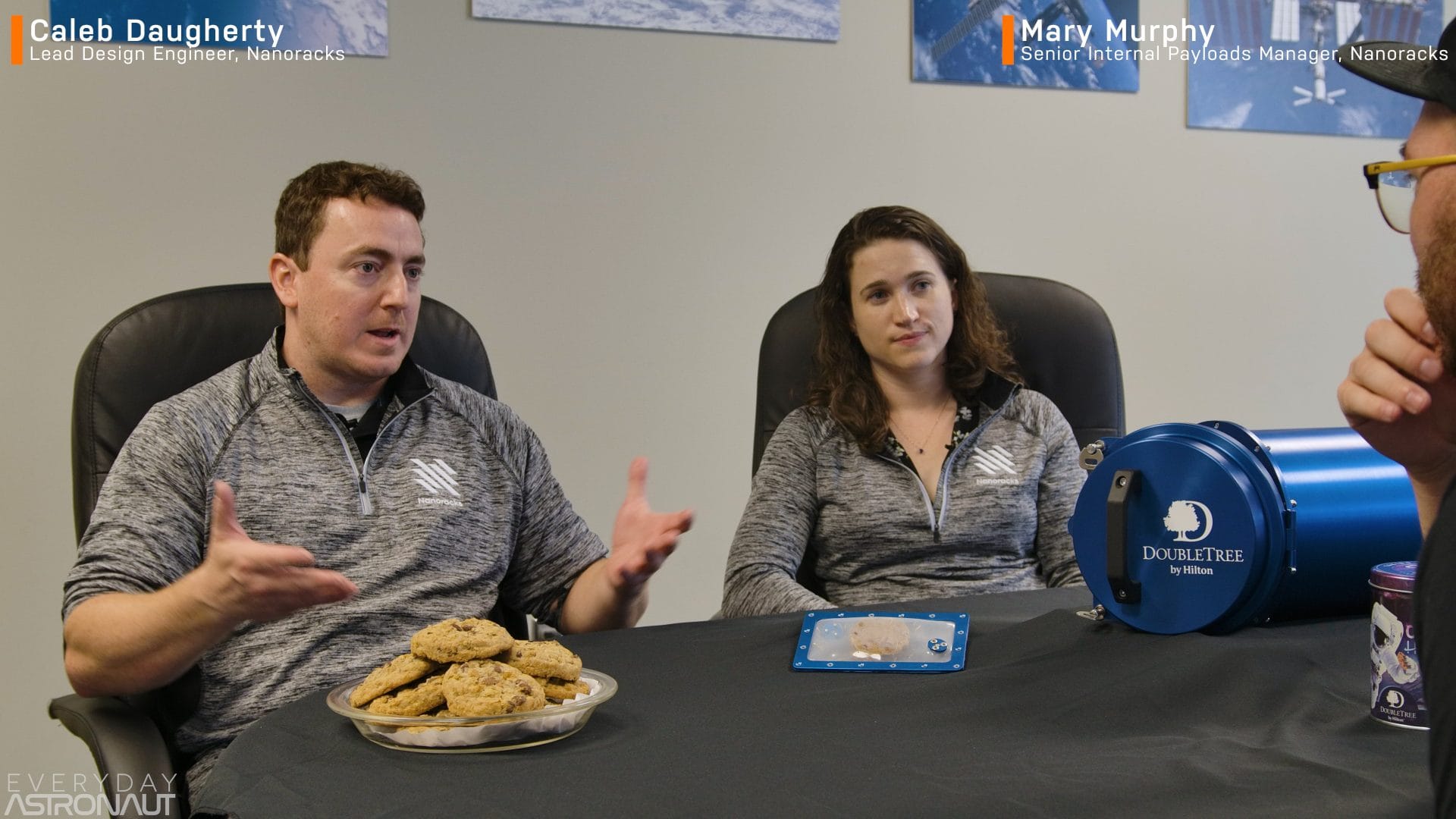 As NanoRacks engineer Caleb Daugherty explains it “the air mass [is treated] as a solid for modelling purposes.” Meaning the air is evenly heated to ensure that the heat is concentrated around the area of the cookie.

Why don’t they use a fan to move the heat around?

Firstly, NASA imposes strict RPM and acoustic limits on fans. An oven poses a multitude of hazards, such as burning an astronaut or causing a fire. The addition of a fan contributes to this, with the threat of creating floating debris.

How will the oven deal with the pressure?

The cookie tray incorporates silicon sheets with a 40-micron vent in them.  This allows water vapour and gases to escape, preventing the tray from inflating. “In our initial test, we didn’t have vents, and we ended up making a balloon inside the oven,” Caleb noted.

Additionally, there is a 40-micron vent at the back of the oven. This will prevent the buildup of pressure in the oven itself. Consequently, the cookie smell will be vented out of the oven and enter the avionics air plume, circulating the station. This will make it possible to waft the aroma of cookies around the station.

How will the astronauts deal with the pressure?

Rather torturously, the astronauts won’t be allowed to try the first samples. Instead, they will be forced to endure the inviting smell. The inaugural batch of cookies is riveted shut to ensure that they aren’t tampered with before they are returned to Earth, where it’ll be assessed if they’re safe to eat.

As compensation for the torment, DoubleTree sent up a tin of pre-made cookies for the astronauts to enjoy.

To summarise, food is essential – after all, we can’t live without it. Food in space is perhaps even more necessary than food down here on Earth. As we prepare to send humans further away from our natural sources of food, it will become increasingly important to have ways of serving space food that is both nutritious and delicious.

The NanoRacks oven is a small but significant advancement in how we prepare food in space. The simplistic design that NanoRacks has come up with has virtually no moving parts and prioritises safety.

Food in space has always been a bit of a practical matter. The crew on-board the International Space Station are working 12 hours a day; subsequently, time is a valuable commodity. Therefore, having a quick and easy way to prepare a meal helps free up precious time.

However, in future, the industry will need to take a greater focus on hospitality. Paying customers will expect greater finesse in their space trips.

I, for one, would love to be greeted with the aroma of warm cookies upon opening the hatch to a space hotel. Perhaps DoubleTree will create one of the first space hotels!

I want to say a quick thanks to the team at DoubleTree who arranged for me to see the ISS mock-up and speak with the experts at NanoRacks. I like to learn by asking lots of questions, so that was especially awesome.

As always, I owe a special thanks to my Patreon supporters for helping make content like this possible. If you want to help me do what I do, consider supporting me on Patreon. Another fun way to support what I do is to go to purchase my out-of-this-world merch.

What do you think?

How about you, what would you want in a space hotel? What other questions do you have about space food? Let me know your thoughts and questions in the comments below. You can also check out www.CookiesinSpace.com or www.newsroom.hilton.com/cookiesinspace, and get involved on social media by tagging @DoubleTree and using #CookiesinSpace. This content was sponsored by DoubleTree by Hilton.