What’s All This Mean?

Progress MS-14 is the 75th Russian cargo resupply mission to the International Space Station (ISS). It will fly on a Rocosmos Soyuz 2.1a rocket launched from the Baikonur Cosmodrome in Kazakhstan. The automated spacecraft is expected to stay at the ISS for about 210 days.

Space stations need a constant stream of cargo to keep them fully supplied and capable of supporting both their humans and experiments. Back in the 1970s, Soviet engineers determined that the best way to resupply a space station was with an automated cargo space vehicle. Consequently, the Soviet Union developed the Progress cargo vehicle derived from the Soyuz spacecraft. Progress started servicing the Salyut space stations in 1978. Today, they service the ISS with the Progress MS series, an updated version of the original spacecraft.

Starting with the first Progress, designers divided the spacecraft similarly to the Soyuz’s three compartment layout. At the back is the propulsion system, which also includes the guidance equipment. In the middle, what would be the Descent Module for Soyuz, is the tanker section on Progress. These tanks are used to refill station consumables such as propellant and water. Finally, the front section contains a pressurized area where crews can retrieve other supplies, for example, experiment racks and food.

Unlike SpaceX’s Cargo Dragon spacecraft, Progress MS-14 won’t be able to return samples back to Earth. When Soviet engineers designed the original Progress back in the 1970s, they blended all three modules together. That configuration left no ability for the spacecraft to survive the return through the atmosphere.

Progress MS-14 is the 75th Russian resupply mission to the ISS–that’s where the “75P” designation comes from. It’s also the 166th flight of a Progress spacecraft, including all variants. The MS series began flying in December 2015 and their tail serial numbers started at 430. Serial number 444 is Progress MS-14 (75P)’s internal designation.

Cargo for this resupply mission will include about  2,480 kg of supplies in total to the ISS. The cargo breakdown is:  in the tanker section, about 650 kg of propellant for refueling; approximately 420 kg of water; around 50 kg of pressurized oxygen. In the pressurized section, around 1,350 kg of dry cargo will be available to the crew to unpack, such as food rations, life-support and flight control systems, hygiene and medical supplies. After about 210 days at the ISS, the station’s crew will pack the pressurized section with garbage and waste products. Finally, Progress MS-14 will separate from the ISS and burn up in the Earth’s atmosphere, likely in November 2020. 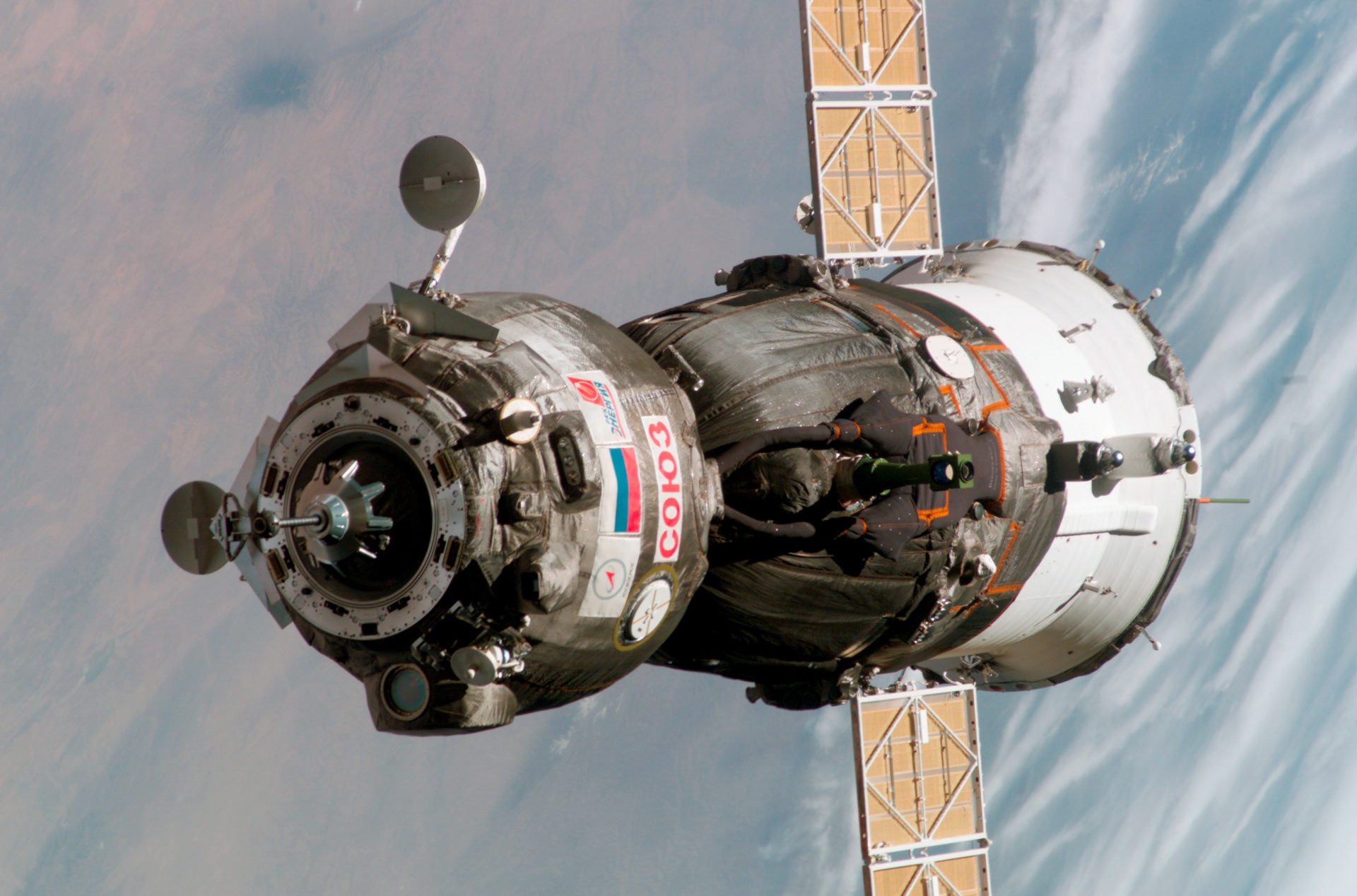 What is the Soyuz 2.1a Rocket?

Soyuz is a direct descendent of the Soviet rocket that launched Sputnik 1, the R-7A Semyorka. Introduced in 1966, the Soyuz launch vehicle has flown over 1,700 times, in many variants. From late 2002 to 2019, the Soyuz-FG launch vehicle was the only one used by Roscosmos to launch crews to the ISS as well as Progress spacecraft. The FG variant’s last launch was the crewed Soyuz MS-15 mission. Soyuz-FG used an aging analog flight control system that was outdated. It was a stop-gap vehicle until Roscosmos could design a more modern one and flight prove it.

The modern Soyuz 2.1 launch vehicle uses digital flight controls with significantly improved capabilities over the Soyuz-FG. The Soyuz 2.1 comes in two versions that use different third stages: 2.1a and 2.1b. The first launch of a Soyuz 2.1a was on November 8, 2004, from the Plesetsk Cosmodrome in northern Russia.

The core stage uses an RD-108A engine with four combustion chambers and four nozzles. The engine uses kerosene and liquid oxygen propellants. The core also has four vernier thrusters, used for three-axis flight control once the side boosters separate. The core stage separates from the upper stage in a “hot staging” process. They fire the upper stage engine before stage separation occurs, then they release the stages.

Connected to the core stage are four booster rockets. These side boosters use the RD-107A engine. It uses the same propellants as the rest of the Soyuz 2.1a’s other stages.

They locate the kerosene tanks in the cylindrical part and the liquid oxygen tanks in the conical section. Each engine has four combustion chambers and four nozzles. Each booster contains two vernier thrusters to control the rocket’s direction.

During side booster separation, the boosters peel off and cartwheel outwards away from the Soyuz 2.1a. We know the pattern they create as the “Korolev cross.”  The name is an homage to the rocket’s designer, Sergei Korolev. He was also the USSR space program’s Chief Designer in the 1950s and 1960s.

The third stage uses either an RD-0110 engine in the Soyuz 2.1a version, or an RD-0124 engine in the Soyuz 2.1b version. The MS-14 mission utilizes the 2.1a launch vehicle, with a third stage using an RD-0110 engine. Although the rocket can use the Fregat upper stage, it is removed for crew or cargo resupply missions to the ISS. Progress MS-14 spacecraft’s thrusters are enough to reach the ISS without  the need of the Fregat stage. Progress MS-14 will conduct a rapid rendezvous with the ISS, catching up to it and docking on the second orbit.

Where Does It Launch From?

Did you know most Russian rockets don’t launch from Russia? That’s right. Since the 1950s, most of Russia’s launches occur in Kazakhstan’s Baikonur Cosmodrome. Since the break up of the Soviet Union, in 1991, Russia leases the Cosmodrome from Kazakhstan. The lease expires in 2050.

During the Cold War, in the 1950s, Soviet officials located this once secret rocket base in the Kazakh desert to hide it from western intelligence agencies. The location’s isolation from populated areas also means if a mishap occurs, rockets won’t explode over people. Baikonur’s location is in the Almaty time zone (ALMT), six hours ahead of Universal Coordinated Time (UTC), and three hours ahead of Moscow time (MSK).

Baikonur has the distinction of launching the world’s first artificial satellite, Sputnik, in 1957. The same launch pad also launched the first human into space, Yuri Gagarin in 1961. Ever since Launch Complex-1 (LC-1)  has been named Gagarin’s Start. It launches all R-7 derived rockets, including the Soyuz family. From 1967, all crewed Soyuz missions launched from here until 2019.

Progress spacecraft started launching from Baikonur in 1978. Since 2015, all Progress MS missions launch from Launch Complex 31/6 which handles the Soyuz 2 family of rockets. Soyuz MS crewed spacecraft started using LC-31 in April 2020, with the launch of the Soyuz MS-16 mission. LC-31 can also launch the recently retired Soyuz FG rocket.