We are going back to MARS! Yes you read that correctly, NASA has spent years developing its next piece of hardware to make the daring trek to the red planet. The rover dubbed Perseverance will launch from the the East Coast of the United States and in around six months to land on Mars.

NASA has chosen United Launch Alliance (ULA) to launch the 1,025 kg (2,260 pound) rover on its six month long journey to the Red Planet. The overall mission has been divided into four segments by NASA: Launch, Cruise/Approach, Entry-Descent-Landing (EDL) and Surface Operations.

ULA’s Atlas V 541 (more on what that means later) will lift off from SLC-41, CCAFS at 9:35 am EDT with the Perseverance rover in its 5 meter fairing. Climbing to an initial orbit of 270 km (167 miles), the Centaur upper stage will then boost the rover towards Mars. It is important to note that there is a one month period where the position of Earth and Mars are aligned perfectly for a transfer. After this period ends, the teams will have to wait for about 26 months before a new opportunity opens up. However, NASA has expressed interest in a contingency plan after the window is up.

Surprisingly, this six month phase has a lot more to it. The only part of the spacecraft left is Perseverance which is enclosed in its aeroshell. This shell acts as protection, but also hosts the power and course correction propulsion systems. Throughout this time, mandatory health and communications checks will be performed by NASA’s specially trained team of engineers and mission specialists. Towards the end of this phase, preparations will begin for the Entry, Descent and Landing (EDL).

Also known as the “7 minutes of terror”, this phase of Perseverance’s flight can be some of the most nerve wracking for the team and space fans. Due to the fact that Mars is so far away from Earth and communications are limited to the speed of light, the transmission signals can take about 20 minutes to reach Earth. That’s a 40 minutes round-trip. All the data that the teams see happened 20 minutes ago. By the time we see the spacecraft enter the Martian atmosphere it could already have landed, or crashed.

In the final and longest stage of the mission we have Surface Operations. This includes everything from the moment Perseverance touches down, to when it can no longer function. The mission is scheduled to last about one Martian year, or 687 Earth days. However, the team will often refer to mission days as “Sols” or Martian days. In this case, the mission will last 669 sols. The first 90 sols will consist of initial checkouts of all of Perseverance’s systems to ensure that they are all functioning properly.

The rover will also deploy its antennae and begin taking images of the surrounding surface for the scientists to observe. During this initial period, the team will be on Martian time, which means starting their shifts 40 minutes earlier each day because one Sol is approximately 40 minutes longer than one Earth day. Another major event on Mars 2020 is the technology demonstration of the Ingenuity drone. After deployment, the team will conduct a series of tests to prove that the drone is ready for normal operations. Keep in mind, this is the first time a drone had been on Mars, or any other planet other than Earth.

Keep an eye out on the Mars 2020 website for future updates on surface operations after touchdown!

So what about the actual payload?

The payload consists of the Perseverance rover and the attached drone, Ingenuity. The Perseverance rover is by far the most complex and most technologically advanced piece of hardware to travel to another planet. Similar in shape/size to the former, still operating, Curiosity rover, launched on November 26, 2011, Perseverance is only 126 kg (278 pounds) heavier and 13 cm (5 inches) longer. Taking a big step up from the Curiosity rover, Perseverance will have similar, but much more advanced instruments focused on sample collection for future return to Earth. Let’s talk about some of the major instruments on the rover.

Perseverance won’t be traveling alone! It will be accompanied by a drone. This will be the first time that humans have flown anything on another planet. Weighing in at just 1.8 kg (4 pounds), Ingenuity has a few key objectives:

What rocket will propel Perseverance to Mars?

The Atlas V Common Cores are manufactured near Decatur, Alabama and are then transported via the Mississippi river and the Gulf of Mexico to either California or Florida.

The second number determines the number of strap on solid rocket boosters (SRBs). It can range from 0 to 5, and in this case, there are four strapped on to the side of the center common core. The third and final number refers to the number of engines on the Centaur Upper Stage, which can be either one or two. In this case there will be one engine. The only time that there has been two engines (on an Atlas V) was on Starliner’s OFT-1. So to summarize, for the Mars 2020 mission, this rocket has a 5 meter fairing, 4 solid rocket boosters, and 1 engine on the Centaur Upper Stage. 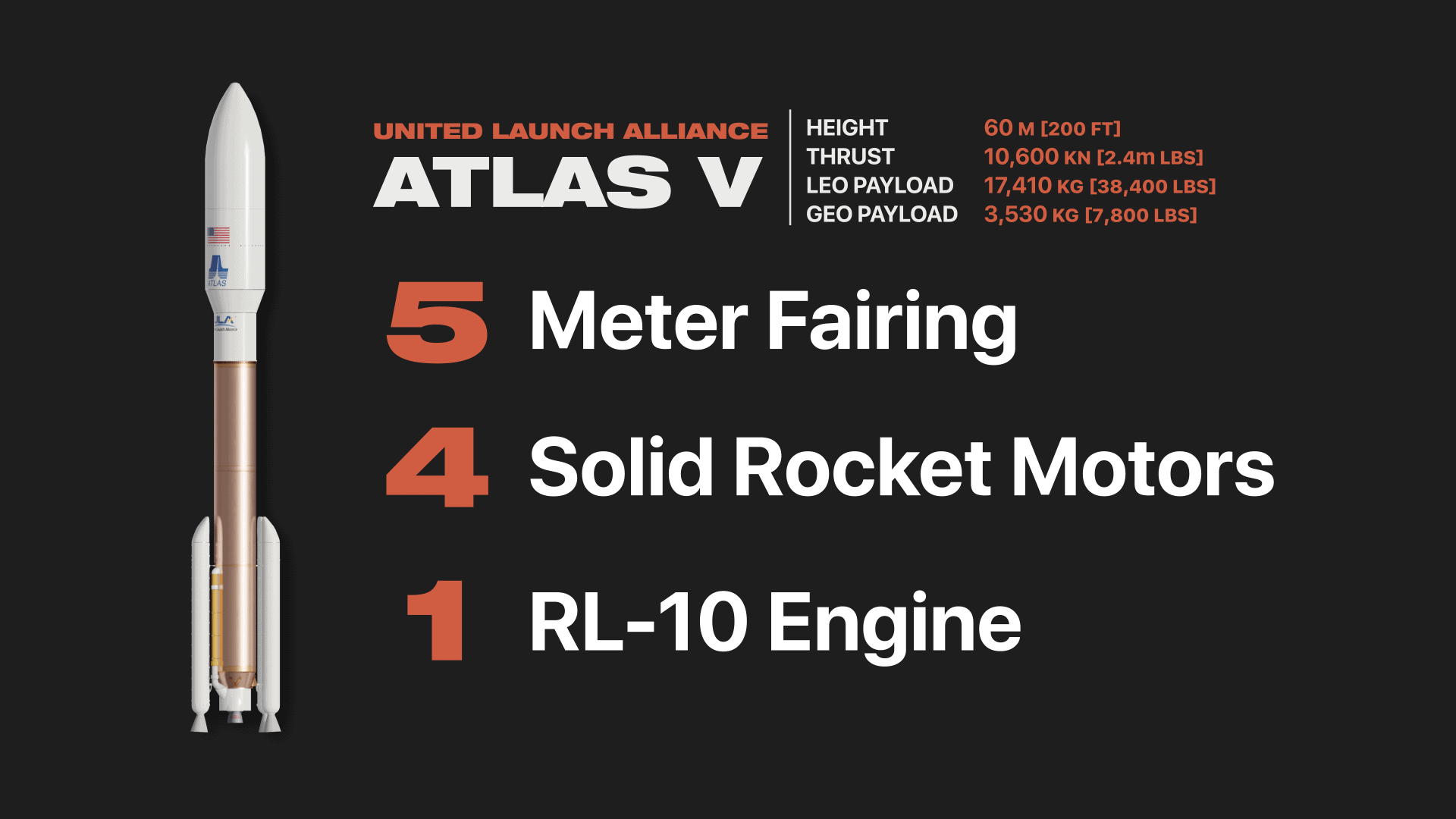 Why Are The SRBs Positioned This Way?

It is unique to the Atlas rocket to have their solid rocket boosters (SRBs) positioned in this way, but why is that? When for example 5 SRBs are used, they are positioned with two on one side and three directly opposite of them. If you notice carefully in the image below, there are long and somewhat flat pipes running down the side of the first core stage. These are called raceways and carry fuel from the tanks down to the engines and some carry gases back up to the tanks to pressurize them, so the fuel stays flowing out the pipes. When Atlas was designed, these raceways were placed in their positions without the thought of SRB placement. So when more SRBs were needed, they were placed in the most convenient spot.

But you might ask, won’t that offset the thrust and make it fly in the wrong direction? Well, the answer is no. Because the engines on the core stage can gimbal, they counteract that offset of thrust by vectoring their thrust, which is known as thrust vector control (TVC). The SRBs, and most of them for that matter, do not have TVC abilities.