The UAE’s first Mars probe “Al-Amal”, or Hope, will launch from Japan atop a Mitsubishi Heavy Industries H-2A-202 rocket. This is one of three Mars missions to be launched during summer 2020. The U.S and China will also be launching Mars probes during the 2020 window — which lasts from mid-July to early August.

The H-2A-202 is an expendable launch system operated by Mitsubishi Heavy Industries for the Japan Aerospace Exploration Agency.  Both its center and second stages run off of liquid fuel: with LOX (liquid oxygen) and LH2 (liquid hydrogen) being the oxidizer and fuel, respectively.  The rocket its self is designated H-2A, with the ‘-202’ part of the name denoting the Solid Rocket Booster (SRB) configuration. Like the ULA Atlas V, the 202 means it has 2 SRBs strapped to the bottom of the rocket.

The project was started in May of 2015 when the UAE space agency contracted the Laboratory for Atmospheric and Space Physics at University of Colorado Boulder to design and manufacture the probe.  The spacecraft’s primary mission is to study the climate on Mars. It will do that by studying how the lower and upper layers of the atmosphere interact with each other, as well as searching for connections between today’s Martian weather and the ancient climate of the Red Planet. According to Gunters Space Page, it will do this by using 3 main instruments: 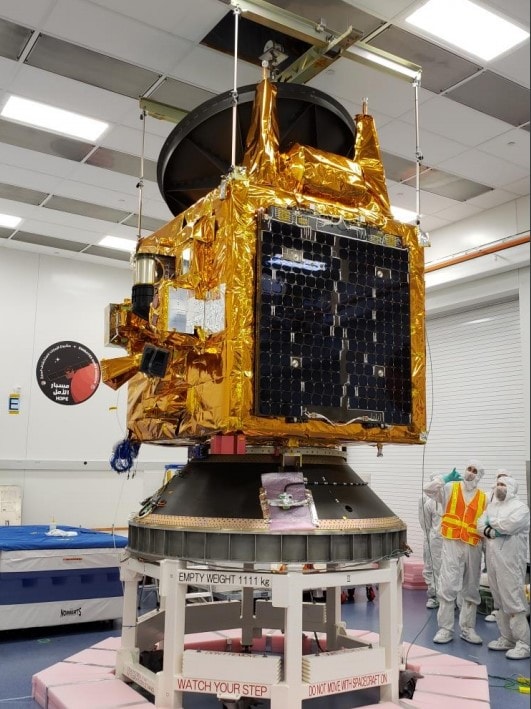 For an even more in-depth look at this mission here is a slide show from JPL: JPL Slide Show for Al-Amal.