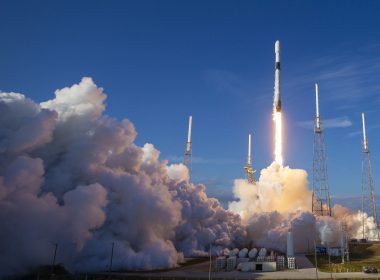 Postponed indefinitely because of the worldwide pandemic. We'll update this page when more is known. SpaceX will be launching the SAOCOM 1B and the GNOMES-1 Earth observation satellites along with the Sequoia SAR smallsat on top of their work horse rocket, the Falcon 9. The Falcon 9 is a two stage launch vehicle consisting of 9 Merlin 1-D open cycle engines on the first stage (hence the name, Falcon 9) and one vacuum optimized Merlin 1-D on the second stage. Both stages run on RP-1 and liquid oxygen (LOX). After stage separation, the booster will perform a boost-back burn, reorienting itself toward the cape, a reentry burn, slowing itself down before hitting the dense part of the atmosphere, and finally a landing burn, allowing for a soft touchdown on SpaceX's landing pad Landing Zone-1 (LZ-1). As of now, it is unknown if SpaceX will attempt to recover the fairings with Go Ms. Tree and Go Ms. Chief.
byTrevor Sesnic
6 comments