In a succession of launches for the National Reconnaissance Office (NRO), United Launch Alliance returns with NROL 44. Because this launch is for the United States Government, not much is known about the size, mass, and capabilities of the payload.

What is the NROL-44 mission?

Because United Launch Alliance has built up the reputation over the past few decades of being an incredibly reliable launch provider, they can often be trusted with high value payloads such as Mars missions, future piloted missions, and government contracts. In this case, the National Reconnaissance Office (NRO) has designed and built another satellite, which will be launched by ULA.

Not to mention that this has been a mission, ready to go for a while. In November of 2019 the Delta IV Heavy rocket for this mission was transported and erected at Space Launch Complex (SLC)-37B. Due to multiple complications with range violations, mechanical and electrical problems found during the Wet Dress Rehearsals (WDR)(link), NROL-44 has been pushed back farther and farther.

Keep in mind that the only purpose of ULA is to boost the satellite into orbit. After it separates from the Delta Cryogenic Second Stage (DCSS), ULA no longer is in charge of the satellites and the NRO takes over.

Traditional spy satellites have often been large vehicles, such as the KH-11 (or “Key Hole”) family of vehicles, that look remarkably similar to the Hubble Space Telescope. These satellites could have a mass between 12,000 kg and 20,000 kg.

Technological advancements since the time of the Key Hole design of the 1970s, plus the size of the rocket and its payload capability, tell us that this payload is likely to be smaller than what we may be used to thinking a reconnaissance satellite should look like. Improvements in electronics and electro-optics, particularly in miniaturization, have seen a reduction in size over the years for virtually all types of satellite.

What is the Delta IV Heavy?

Another mighty and hefty rocket of ULA’s fleet, the Delta IV Heavy has only flown eleven times, making NROL-44 the 12th flight. Because the rocket uses Liquid Hydrogen (LH2) as its oxidizer, the rocket appears to light itself on fire prior to lifting off and soaring into the sky. Don’t worry all is fine, this procedure is purely to burn off the excess H2. However, it is very unique and something that will be missed as the Delta IV Heavy retires. 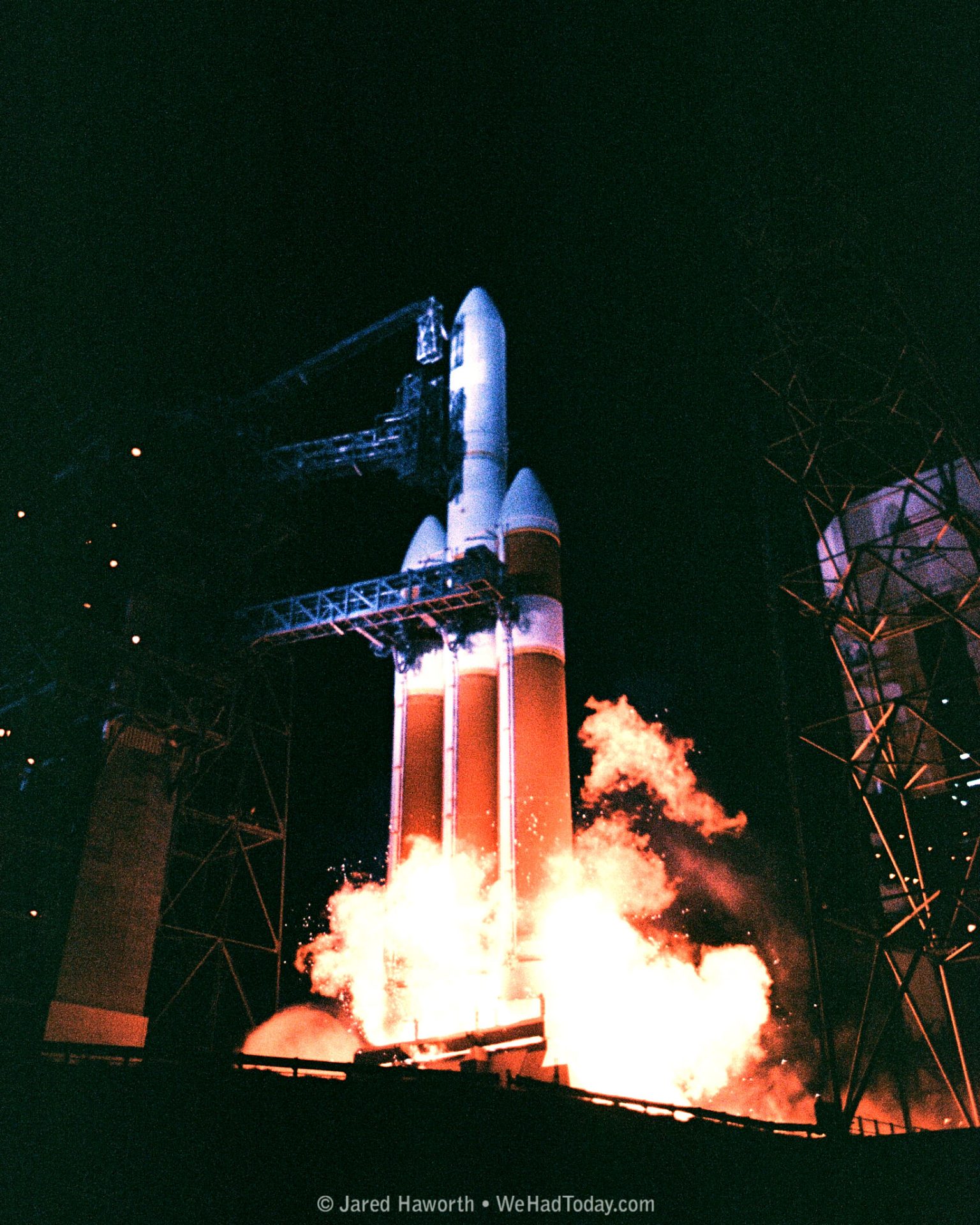 A Delta IV Heavy about five seconds before liftoff burning off the excess hydrogen.

The Delta IV First Stage (At take off)

The gigantic three core first stage consists of the core booster stage plus the side boosters. Each of these is known as a Common Booster Core (CBC). Each of the 3 CBCs on the launch configuration is 40.8 m (134 ft) long, features one RS-68A engine each running on Liquid Hydrogen (LH2) and Liquid Oxygen (or LOX). The combined thrust of all three CBCs running together is 9,420 KN (2,120,000 lb).

The Core Stage (After booster separation)

The central CBC throttles down after lift-off so that it can conserve fuel for use after side booster jettison. The side CBCs are jettisoned after their propellant is consumed after 242 seconds. The central core stage is the remaining single CBC previously mentioned. Its burn time is 328 seconds in total, in other words it runs for an additional 86 seconds after side booster separation.

The upper stage of the Delta IV Heavy is 13.7 m long, 5.1 m wide (the same as the width of the CBCs) and uses a single RL10-B-2 engine. This engine is very efficient but has low thrust (110 kN, or 25,000 lbs). In general, a mission to this orbit will take three burns by this second stage to reach its destination.

The Past and Future of Delta IV Heavy

In terms of the future of the Delta IV Heavy, ULA has no plans to produce any more of the launch vehicles and will use the remaining five to total 17 missions overall. In its lifetime, the Delta IV Heavy has launched the Parker Solar Probe, and seven other NRO missions. However, the rocket is getting old, and it is becoming too expensive compared to ULA’s other rockets and the rockets of other companies like SpaceX. As the world begins to say farewell to this mighty machine, here are some words from CEO of ULA Tory Bruno to the Everyday Astronaut team, “Standing on the pad, in front of a thirty story high Delta IV Heavy, about to lift a tiny Parker Solar Probe, next to the 90 year old solar science pioneer, Dr. Parker himself.” 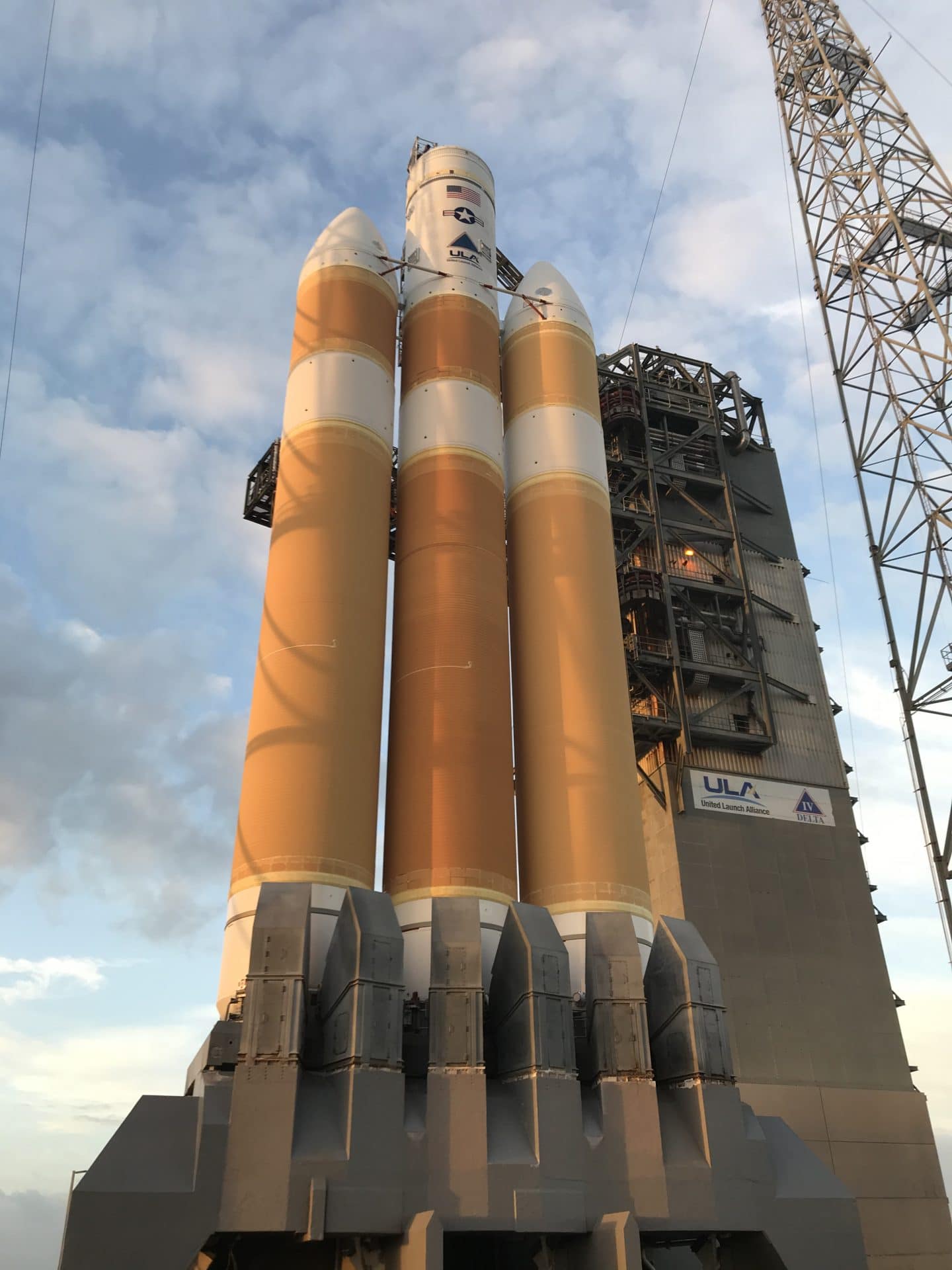 Drove down to watch this one. A foolish decision to make at the start of the semester, but hoping it’s worth it!

Have fun and stay safe!

…guess we both come down for nothing…trying it again next week??

How does the Delta Heavy compare to the Falcon Heavy (ie: thrust at lift off, capacity limits , cost per launch by lb. per payload etc) ?

Scott Manley has done a comparison video I think! Bottom line: falcon heavy is cheaper to launch and Kenmore efficiently put a bigger payload into a low earth orbit… Due to the differences in efficiency of Merlin vacuum versus RL10 cryo-genic upper stage… Almost anything beyond low earth orbit the delta four heavy quickly overtakes the capability of falcon heavy

Thanks for the Information !

thankyou for the info!

Yes customs tell me about it. Music festival shirt Item just arrived via Switzerland since July 16. And then customs charge. Over £50 for a Tshirt. Most expensive shirt I ever purchased

I’ll be near the cape to through the launch window. Any recommend viewing areas as well as gear to bring? This will be my first launch to see!!

When a launch gets postponed a month…