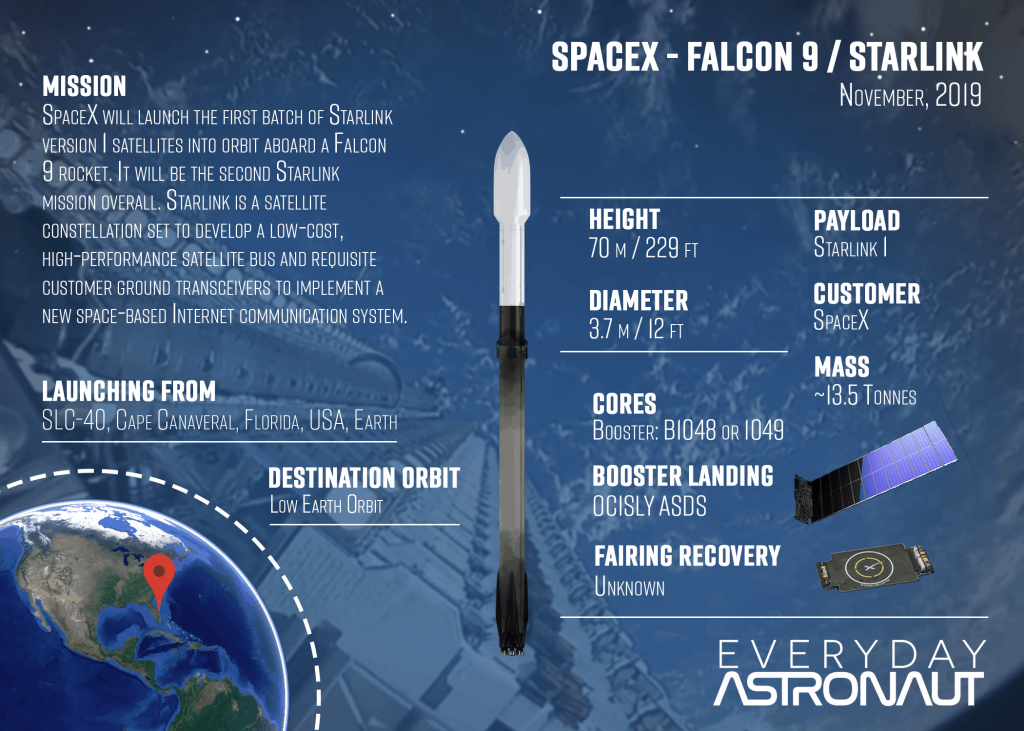 SpaceX will be launching their Starlink satellites on their flight-proven 1 st stage B1048.4. This particular 1 st stage has already flown thrice and will become the first booster to fly for the fourth time. It has flown the previous missions Nusantara Satu in February of 2019, Saocom 1A in October of 2018 and Iridium-7 in July of 2018. The rocket will lift off at Launch Complex 40 (LC-40) from Cape Canaveral Air Force Station (CCAFS) in Florida at 14:51:00 UTC and at 09:51:00 local time.

SpaceX’ ships GO Ms. Tree and Go Ms. Chief will be an attempt to catch both fairing halves which is a first for SpaceX. Furthermore, this mission will also be the first to make use of previously caught fairings.  The first stage will attempt to land on an Autonomous Spaceport Drone Ship, OCISLY, 628 km downrange from the launch pad.

Starlink is a satellite constellation operated and manufactured by SpaceX. This constellation aims to provide internet to secluded areas around the world by forming a net of initially 12,000 satellites in three different orbits. About 1,600 will be in a 550 km orbit, 2,800 Ku  and Ka band satellites in a 1,150 km orbit and about 7,500 V-band satellites will orbit the earth at an altitude of 340 km. SpaceX may at some later point increase the number of their satellites by another 30,000 (cough 42-thousand cough). Starlink satellites are equipped with krypton using ion thruster for orbit adjustments and deorbit, a star tracker navigation system, multiple high-throughput antennas, and a single solar panel. They are designed to burn up in Earth’s atmosphere at the end of their lifecycle. Current plans suggest the start of initial service in the US by early-2020.

Could you please elaborate a little more about KU band, KA band, V band, either in this comment or in any of your next video? That’d be good to know.

The Ku band is the portion of the electromagnetic spectrum in the microwave range of frequencies from 12 to 18 gigahertz (GHz). The symbol is short for “K-under” (originally German: Kurz-unten), because it is the lower part of the original NATO K band, which was split into three bands (Ku, K, and Ka) because of the presence of the atmospheric water vapor resonance peak at 22.24 GHz, (1.35 cm) which made the center unusable for long-range transmission.

The Ka-band (pronounced as either “kay-ay band” or “ka band”) is a portion of the microwave part of the electromagnetic spectrum defined as frequencies in the range 26.5–40 gigahertz (GHz), i.e. wavelengths from slightly over one centimeter down to 7.5 millimeters.

The V band (“vee-band”) is a standard designation by the Institute of Electrical and Electronics Engineers (IEEE) for a band of frequencies in the microwave portion of the electromagnetic spectrum ranging from 40 to 75 gigahertz (GHz).[1][2] The V band is not heavily used, except for millimeter-wave radar research and other kinds of scientific research. It should not be confused with the 600–1000 MHz range of Band V (Band Five) of the UHF frequency range.

I wonder…(it might be a stupid question) all these starlink little satellites that will be launch today in LEO … will eventually lose speed and come back to earth (burning in atmosphere)
Do you know for how long are they going to orbit Earth? Is there any system to keep the speed or accelerate them?

Kind regards!! Your videos are awesome!

Hi Alvaro,
Each Starlink satellite has a Krypton powered ion engine used to station keep and for collision avoidance. Eventually, they will be deorbited and burn up in the atmosphere.

Hello Tim,
I was just wondering why they did not try to recover the fairings this time. Maybe because they were already second hand?
It is interesting to know the reasons behind these decisions.

Thanks a lot for sharing your passion!

SpaceX should be recovering the fairings from the ocean. They made the decision not to catch them because of rough seas hampering the ships.