ArianeSpace will be launching the CSG-1 satellite, plus CHEOPS space telescope for exoplanets and three other rideshare payloads, onboard a Soyuz / Fregat rocket from their equatorial launch site in Kourou, French Guiana, South America on December 18 (postponed from the 17th), 2019.

Introduced in 1966, Soyuz has been the workhorse of the Soviet/Russian space program. The first launch of the Soyuz 2-1a version on November 8, 2004 from the Plesetsk Cosmodrome represented a major step in the Soyuz launch vehicle’s development program. Fregat is the upper (4th) stage of Soyuz 2.1, and it first flew in the year 2000.

The Soyuz version currently offered by Arianespace is a four-stage launch vehicle, which consists of:

It also includes a payload adaptor/dispenser and fairing.

The side boosters’ RD-107A engines are powered by liquid oxygen and kerosene, which are the same propellants used on each of the lower three stages. The kerosene tanks are located in the cylindrical part and the liquid oxygen tanks in the conical section. Each engine has four combustion chambers and four nozzles.

During side booster separation, the boosters perform a well-known pattern, in which they peel off and cartwheel outwards! This is known as the “Korolev cross”, named after Sergei Korolev, the Chief Design Engineer of the USSR space program in the 1960s. 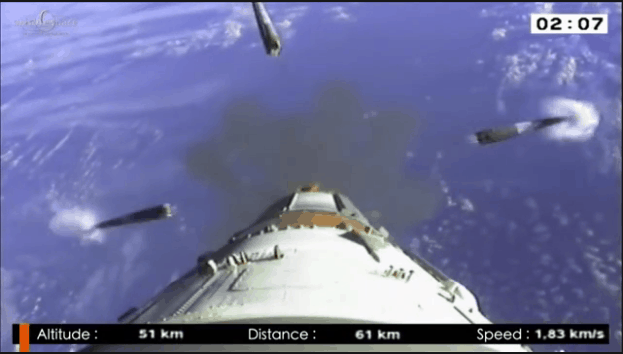 The center core stage is fitted with an RD-108A engine, and also has four combustion chambers and four nozzles. It also has four vernier thrusters, used for three-axis flight control once the side boosters have separated. The third stage engine’s thrust enables the stage to separate directly from the central core. This is called “hot staging”. 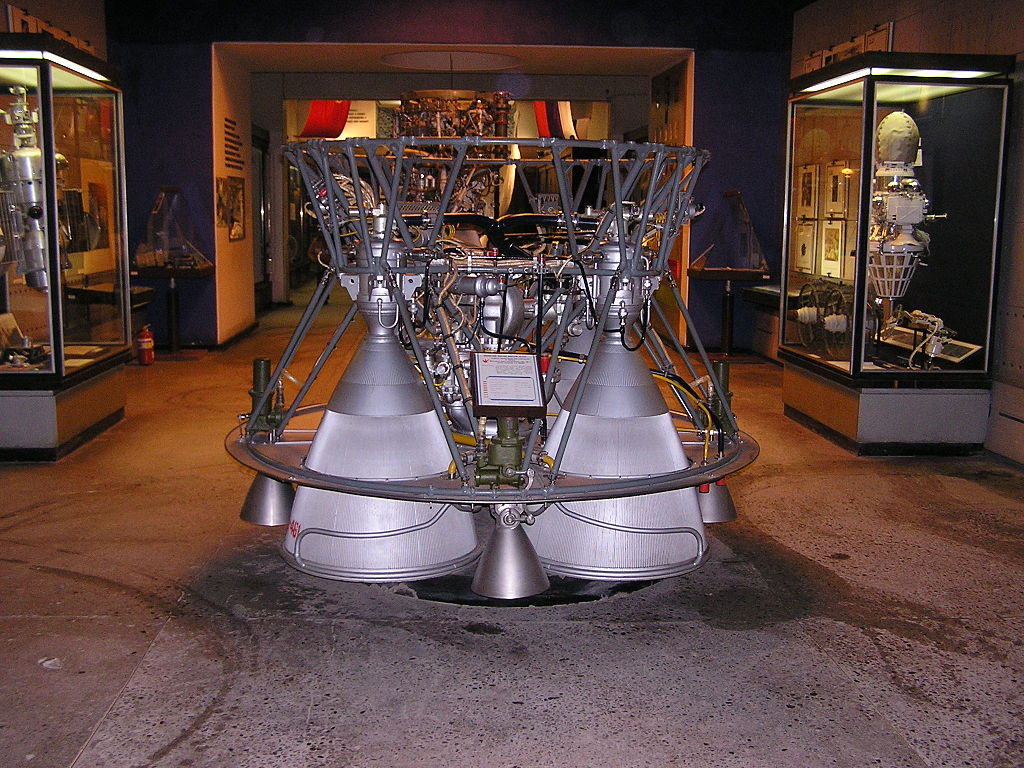 Flight qualified in 2000, the Fregat upper stage is an autonomous and flexible stage that is designed to operate as an orbital vehicle. It extends the Soyuz launcher’s capability, now covering a full range of orbits (LEO, SSO, MEO, GTO, GEO and Earth escape). Fregat is independent from all the other stages, as it has its own guidance, navigation, attitude control, tracking, and telemetry systems! The stage’s engine uses storable propellants – UDMH (unsymmetrical dimethyl hydrazine) and NTO (nitrogen tetroxide) – and can be restarted up to 20 times in flight, so that it can carry out very complex missions.

The Fregat upper stage is encapsulated in a fairing with the payload and a payload adaptor/dispenser. Soyuz launchers operated by ArianeSpace at the Guiana Space Center use the ST fairing with an external diameter of 4.1 meters and a length of 11.4 meters.

COSMO-SkyMed Second Generation (CSG) is an Earth observation satellite, using synthetic-aperture radar (SAR). It was made by Thales Alenia Space, for Thales Alenia Space Italy, on behalf of the Italian Space Agency / Italian Ministry of Defense. The recorded image data will be applied to defense and security assurance in Italy and other countries, seismic hazard analysis, environmental disaster monitoring, and agricultural mapping.

The planned constellation of four CSG satellites will sit in sun-synchronous polar orbits, with an inclination (tilt) of 97.9°, at a planned height of 619 km, and an orbital period of 97.2 minutes (or 97 mins, 12 secs). The local time at the equator as each satellite passes from the Southern to Northern Hemisphere will be 06:00 local time. The expected operating life of each satellite is estimated to be 5 years. Each satellite repeats the same ground track every 16 days, making comparison between one overhead pass and the next fairly nice and simple.

CHaracterising ExOPlanets Satellite (CHEOPS) is a European space telescope for studying exoplanets – planets that orbit stars different from our own Sun! The telescope has a 30 cm (or about 1 foot) diameter reflecting primary mirror, and is of a design called Ritchey–Chrétien, which is a variant of one of the standard Cassegrain type of reflecting telescope designs.

CHEOPS is a joint venture between 11 member states of the European Space Agency (ESA), with Switzerland in the lead.

The scientific instrument will look for impossibly small changes in light when a planet passes in front of the star it’s orbiting. Such an event is called a transit. CHEOPS will look at exoplanets that have been discovered already by pre-existing telescopes, like Kepler and Transiting Exoplanet Survey Satellite (TESS).

Argos Néo on a Generic Economical and Light Satellite (ANGELS) will be fitted with a miniaturised ARGOS Néo instrument, which is 10-times smaller than the equivalent previous-generation device. The instrument collects and determines the position of low-power signals and messages sent by the 20,000 ARGOS beacons now in service worldwide. Two project teams – CNES and NEXEYA for ANGELS, and CNES, Thales Alenia Space and Syrlinks for ARGOS Néo – are working together on this French space project.

EyeSat is an astronomy mission studying zodiacal light and the Milky Way (our own galaxy), in both polarized and non-polarized light, to make a deep and comprehensive image of our galaxy in color.

OPS-SAT is ESA’s flying laboratory; the first of its kind, with the sole purpose of testing and validating new techniques in mission control and on-board satellite systems.