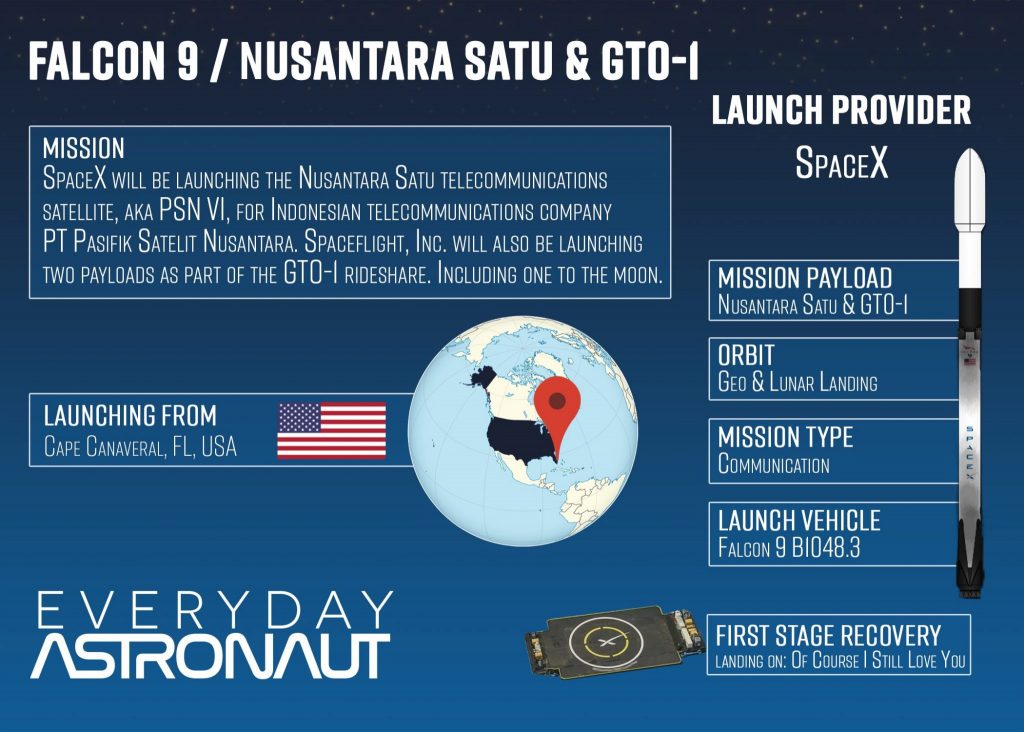 SpaceX will be launching the Nusantara Satu telecommunications satellite, aka PSN IV, for Indonesian telecommunications company PT Pasifik Satelit Nusantara. The Space System Loral built satellite will ride to a geostationary transfer orbit atop a Block 5 Falcon 9 rocket. Nusantara Satu is equipped with 26 C-Band, 12 Extended C-Band and 8 Ku-Band spot beam transponders. The satellite will be located at an orbital position of 146 east and provide broadband voice, data and video service to the Indonesia archipelago. 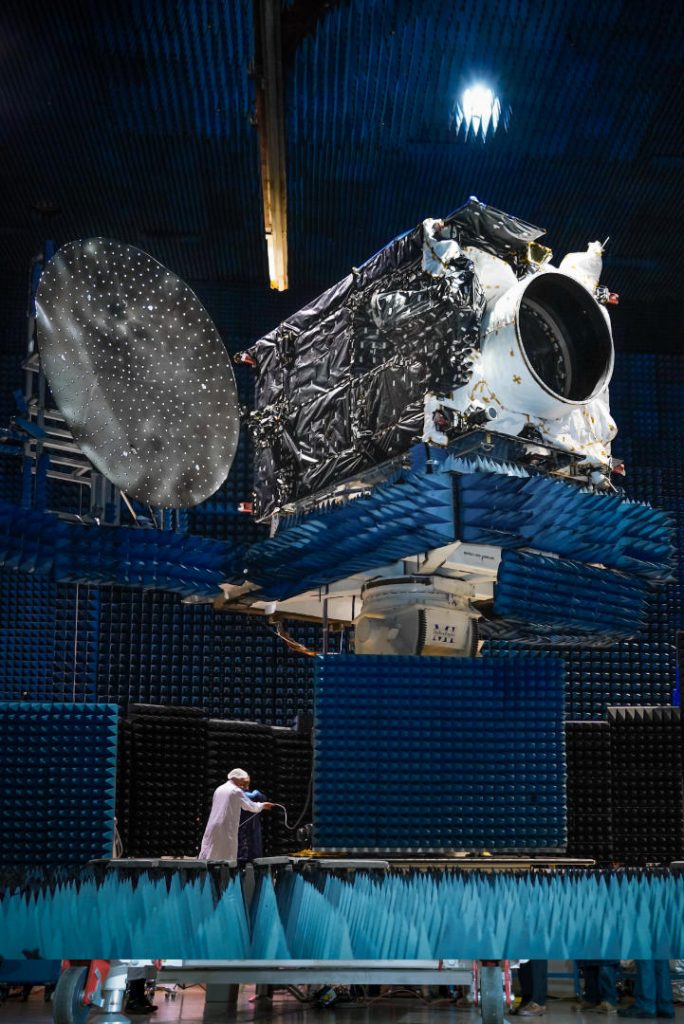 Two additional payloads will be riding to space as part of the GTO-1 rideshare mission, organized by Spaceflight, Inc. The first payload is the experimental S5 satellite built by L3 Applied Defense Solutions on a Blue Canyon Technologies microsat bus for the US Air Force Research Lab. It will test the feasibility of using microsat constellation for space situational awareness and updates to the GEO space catalog. 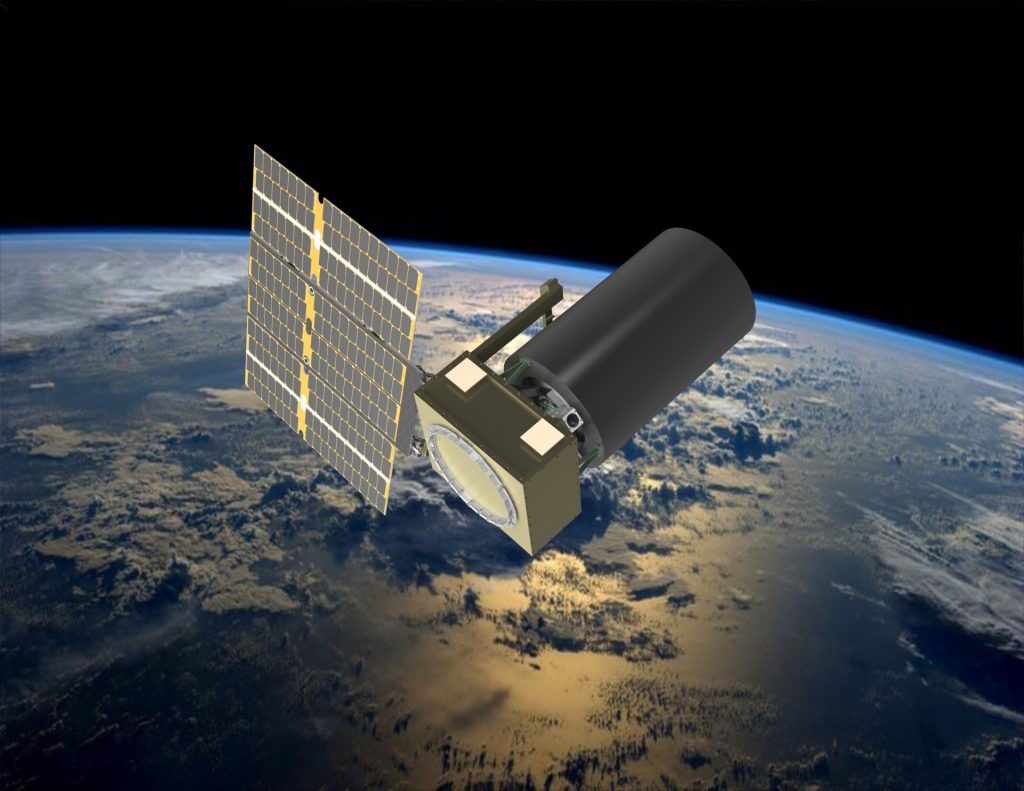 The final payload is the Beresheet Moon lander built by SpaceIL. SpaceIL is an Israeli team that was competing in the $30 million dollar Google Lunar X Prize. The contest came to an end on January 23, 2018 when it was determined that none of the teams would be able to launch by the March 30, 2018 extended deadline. 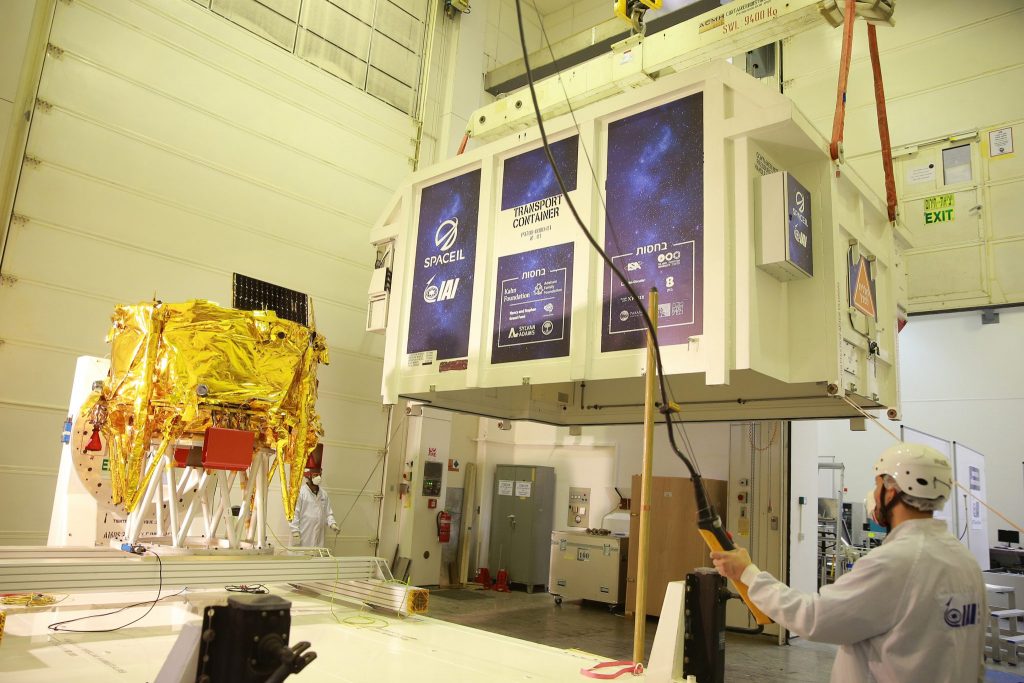 The first Israeli lunar spacecraft, named Beresheet, was loaded into a special shipping container and flown to Florida ahead of SpaceIL’s historic mission to the moon. (credit: Tomer Levi/SpaceIL)

After it’s deployed from the second stage of the Falcon 9, Beresheet will slowly raise its orbit over the course of 40 days until it’s captured by the Moon’s gravity. It will then begin to orbit the moon and slowly lower its orbit over a 6 day period until it reaches a 15 km perilune over its landing site at Mare Serenitatis. If all goes according to plan, the lander will touchdown on the surface of the moon at 15:30 UTC on April 11th. 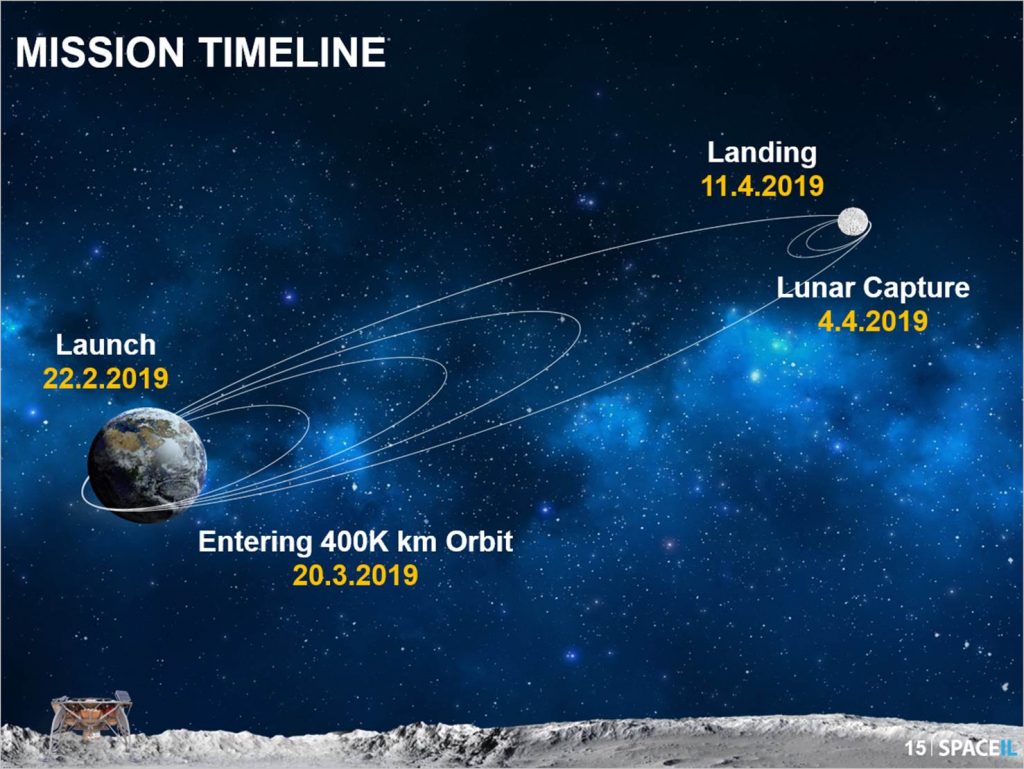 This is the third flight for this first stage booster. Its first flight was in July 2018 for the Iridium-7 mission. It flew again in October 2018 on SAOCOM 1A mission. Following stage separation, SpaceX will be attempting to recover the first stage booster by landing it on the Autonomous Spaceport Drone Ship, Of Course I Still Love You (OCISLY). . SpaceX’s fairing catching ship, Mr Steven, recently transitioned from the west coast to the east coast.

Tim Dodd, the Everyday Astronaut, will be livestreaming this launch starting at T minus 30 minutes. So come ask questions and join the conversation live! If you want the best way to know when a launch is coming, I’d suggest downloading the SpaceXNow OR Launch Alarm apps to stay in the know!

Short Question:
Is this the third flight of this booster? I read that somewhere but couldn’t get any confirmation on that.

Yes. B1048 is being for the third time per SpaceX’s Press Kit. I’ve updated the preview.

Because Teslarati states it. But i couldn’t imagine that we already have a 3rd time – Block 5 Booster launch. Also the SpaceX Now app doesn’t name the booster number.

Yes, Mr Steven did travel through the Panama Canal. I followed the trip by watching the SpaceXFleet Twitter account.

How far out will OCISLY be when the 1st stage lands? First launch viewing, and hoping I’ll get to hear the booms of the landing

SpaceXFleet.com is estimating a downrange distance of 663 KM for OCISLY. Too far to be heard from land – Sorry.

Does spacex already preparing the falcon 9 on pod 40? Im Indonesian and very enthusiasm for this… please let me know

We r in Orlando on holiday and trying to decide whether to drive out to playalinda beach should we ?

The last inbound entry to Playlinda is at 5:20 PM tonight and the park closes at 6:00 PM. You might want to try FL 401 instead.

The beaches in Cape Canaveral and Cocoa Beach do not close so those are options are well, if you want to watch from the beach.

What time is it set for lift off

Hi. Can you include LIFT OFF TIME in the time zone reported by the user browser?

What is the eventual fate of Stage 2? Will it burn in the upper atmosphere or does it have a trajectory that will take it out into deep space??