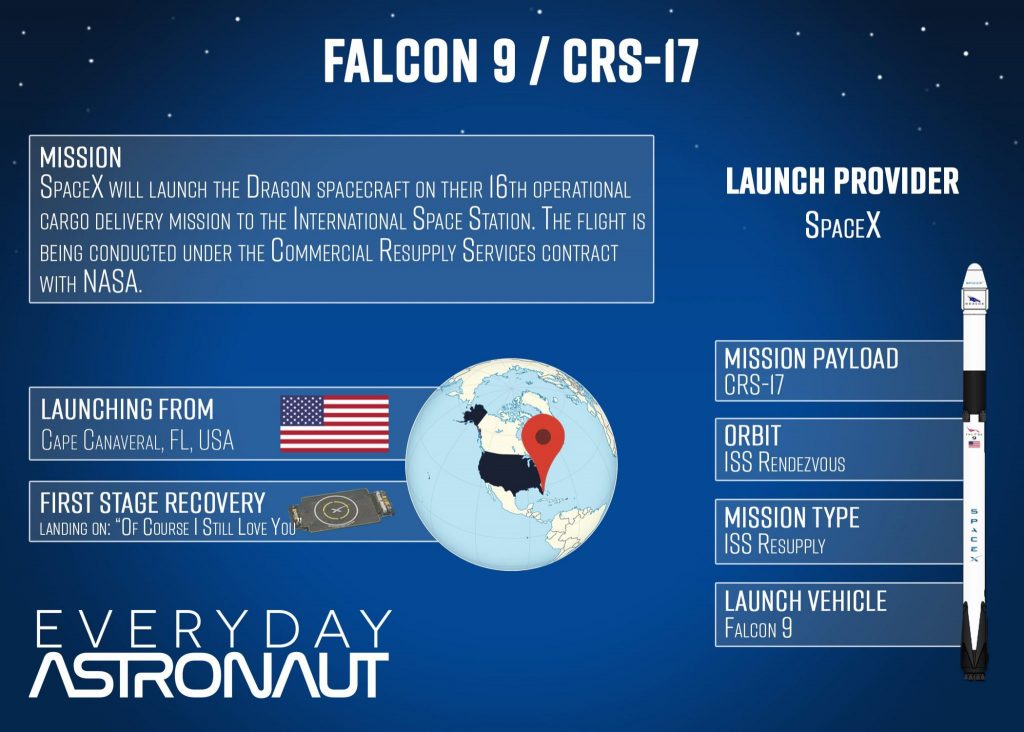 SpaceX will be launching a cargo Dragon on a resupply mission to the International Space Station for NASA. The Dragon will launch on a Falcon 9 rocket from Launch Complex 40 (LC-40) at the Cape Canaveral Air Force Station (CCAFS) in Florida.

The first stage of the Falcon 9 will burn for approximately 2 minutes and 17 seconds, then separate from the second stage and the Dragon 7 seconds later. The booster will then perform a boost back burn to head back towards shore. Initially, the booster was expected to land at Landing Zone-1 (LZ-1). This changed following the anomaly with the crew Dragon on April 20th and an investigation is still in progress there. The booster will now be landing on Of Course I Still Love You (OCISLY), the Autonomous Spaceport Drone Ship (ASDS). OCISLY will be stationed approximately 19 kilometers (12 miles) offshore. This is expected to occur 8 minutes and 27 seconds after liftoff.  Due to the closeness to shore, it’s possible the booster may return to Port Canaveral later in the day. 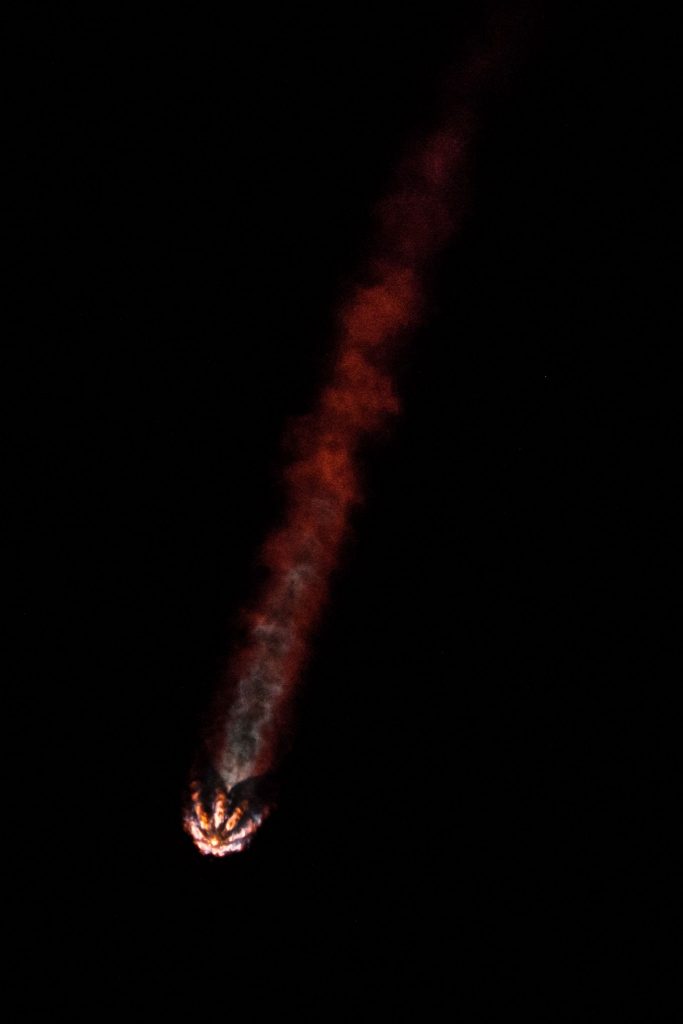 Merlin engines burning on the Falcon 9 during the Return to Launch Site (RTLS) landing for CRS-15 (credit: SpaceX)

CRS-17 is the second of five extended Commercial Resupply Services phase 1 missions awarded to SpaceX by NASA in early 2016.  This cargo Dragon previously flew to the ISS on the CRS-12 mission, which launched 0n August 14th of 2017. It stayed just over a month, returning to Earth on September 17th. The cargo Dragon is expected to arrive at the station on Monday, May 6th. Once it navigates into position, it will be captured by the Canadarm and then berthed to the station a few hours later. NASA TV will be providing coverage of the arrival, capture and berthing. Dragon will remain at the station for approximately 4 weeks and then return to Earth with approximately 1,905 kilograms (4,200 pounds) of cargo. 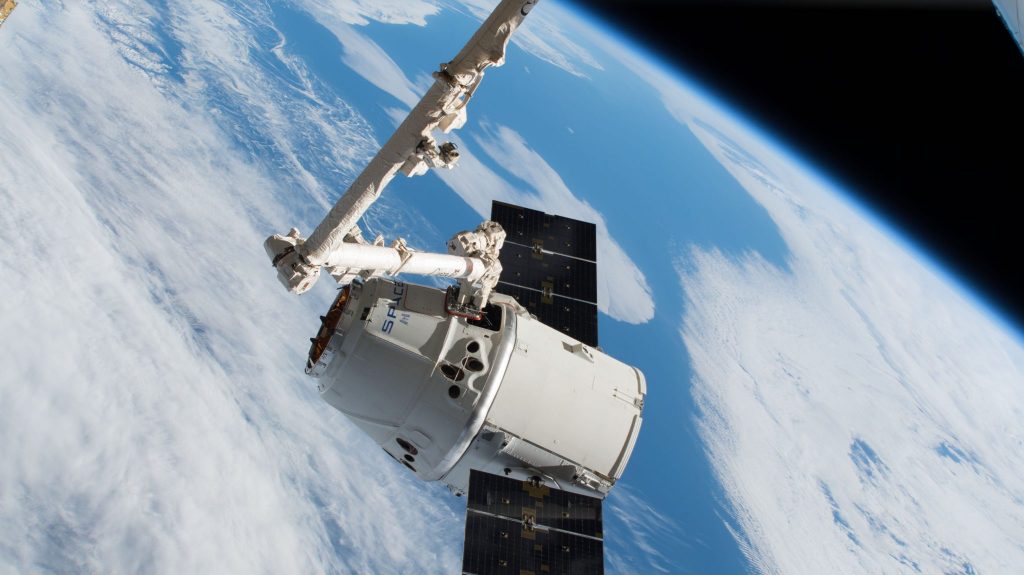 A SpaceX Dragon Captured with the Canadarm2 (credit: NASA)

In addition to the crew supplies on board, several experiments are manifested for this launch including:

If you want the best way to know when a launch is coming, I suggest downloading the Next Spaceflight app to stay in the know!

Has the launch date been affected by the ‘anomaly’ that occured at LZ-1? or would they just have used LZ-2 instead if there was any significant damage?

No impact to the launch date so far. However, the initial plan was to land at LZ-1 and now they will be landing on drone ship, just off shore.

I like the blue info cards, but would say the all upper case text makes them harder to read.

Upper case text might be ok for a heading (not for me tho) but for sentence text, it just slows the brain’s ability to read because of the shape and sometimes the length of each word changes.

We don’t read by spelling out each word in our heads. The brain first scans for patterns or groups of words in a row that it might recognise, then if needed it looks at individual words. Even then it still hasn’t resorted to reading each letter but looks at the SHAPE shape of the word, e.g. the little tails or tops of letters that make up a word ‘s shape, plus its length. This is how we can misread something that is spelt out in front of us. Our brain just mismatches a pattern.

If we get desperate our brain will resort to reading each letter, but that’s a pretty slow way to read.

This isn’t a complaint. The cards are awesome! and congrats to Geoff on his hard work. Just my weird way of trying to support Tim’s mission :)

Featured image is not the Falcon 9 which is launching this mission. I haven’t seen a good photo of it on the pad yet. It is just meant to represent a Falcon 9 with a cargo Dragon on the pad at night. The booster for this mission will be landing on OCISLY, so it does have grid fins and legs.

What is the best place to see this launch and the landing of the booster? A lot of the common places that they talk about online seem like they will be closed this early in the morning.

Not sure who put this post together but it’s pretty comprehensive.

I personally like Coco which will probably be a good option for this launch too because I think Tim said they’ll be landing just off the coast because Crew Dragon issue. I *think* he mentioned it in Our Ludicrous Future.

What launch is the pic from? I thought dragon 1 only flew on new first stages.

That was the CRS-15 mission. Second and final flight for Block 4 booster 1045. Had previously flown for NASA’s TESS mission.