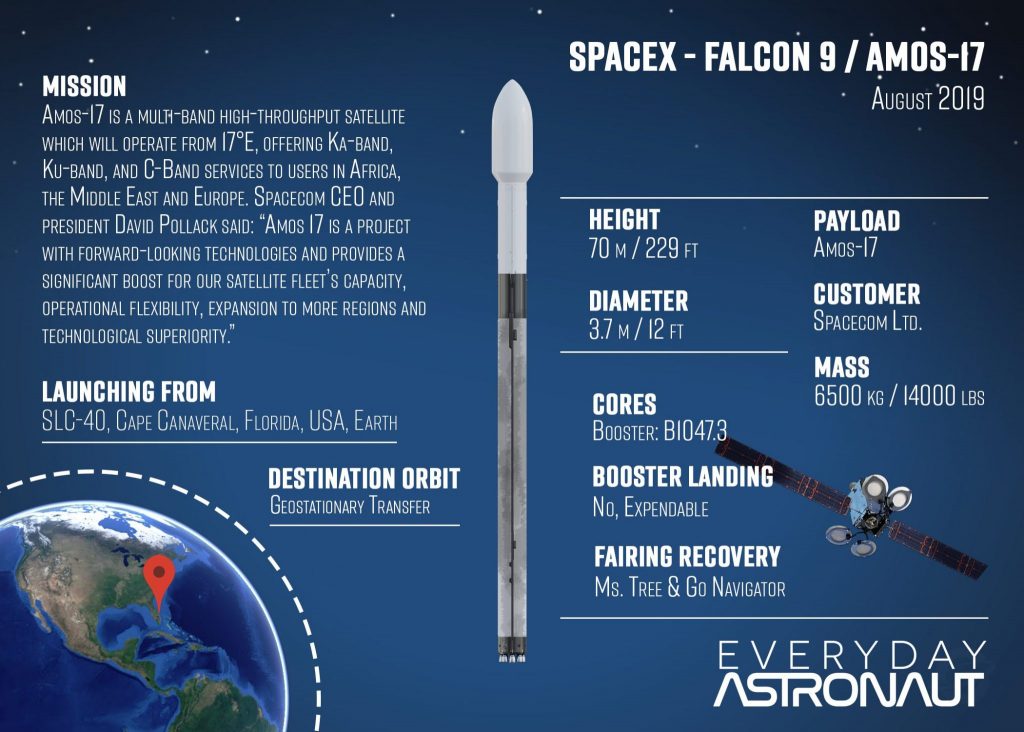 SpaceX will be launching the AMOS-17 satellite for Spacecom on a Falcon 9 rocket. The Falcon 9 will be lifting off from Launch Complex 40 (LC-40) at the Cape Canaveral Air Force Station (CCAFS) in Florida. This booster, B1047, is flying for the third time. It previously boosted the Telstar 19 VANTAGE and Es’hail-2 satellites to orbit. The booster will not be recovered and will be expended on this mission. GO Ms Tree and GO Navigator left Port Canaveral, indicating a recovery of the fairings is going to be attempted.

(Edit Aug 1: They are returning to Port Canaveral after SpaceX announced that another static fire is needed after the replacement of a suspect valve. Edit Aug 3: SpaceX completed the second static fire around 11:40 PM EDT. Edit Aug 4: GO Ms Tree has left Port Canaveral.) 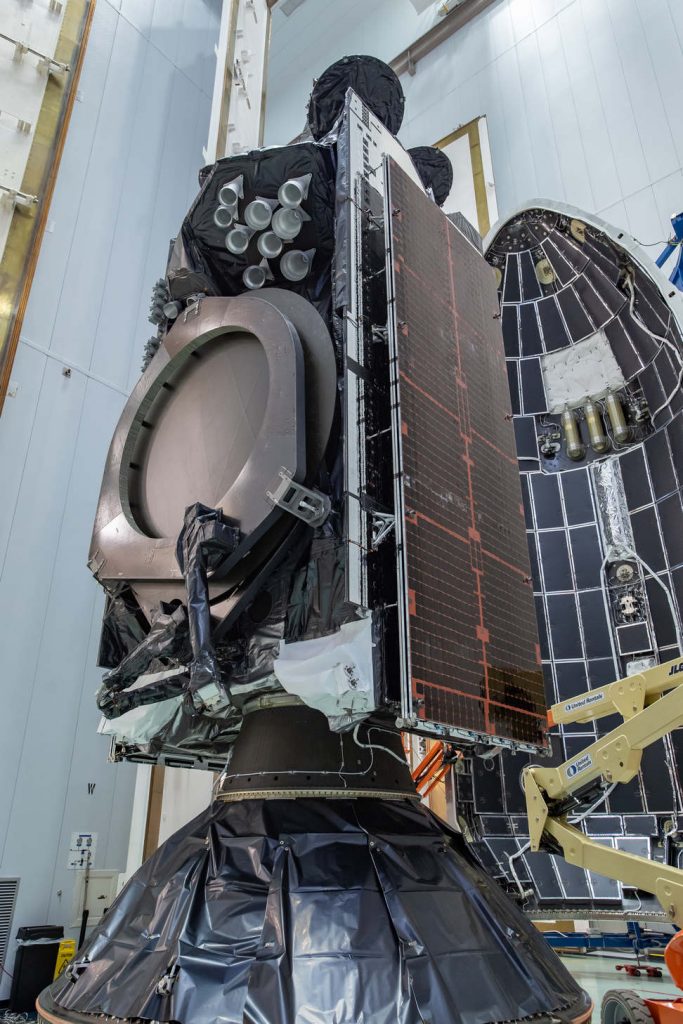 The AMOS-17 satellite was built by Boeing Satellite Systems on their 702MP bus. It will be replacing the AMOS-5 satellite at a location of 17 degrees east in geostationary Earth orbit. AMOS-5 was launched in December of 2011 and contact was lost in November 2015 after experiencing issues with the power and propulsion systems. AMOS-17 has multiple C, Ka and Ku band transponders and will provide telecommunications service to Africa, the Middle East and Europe.

Tim Dodd, the Everyday Astronaut, will be livestreaming this launch starting at T minus 30 minutes. So come ask questions and join the conversation live! If you want the best way to know when a launch is coming, I suggest downloading the Next Spaceflight app to stay in the know!

Why don’t they just use old (recovered) F9B4 boosters for the expendable-booster missions? instead of new/reused B5 boosters?

I’m not an expert, but perhaps they paid more for a newer booster since the satellite was so expensive. The new ones might also be a bit more powerful and this satellite appears to be very heavy AND it’s going into a high orbit.

Are they refurbishing block 4 boosters?

To the best of my memory, they expended or scrapped all Block 4 boosters.

Why they wont recover first stage? Elon Musk said before falcon 9 can be reused over 100 times.

Because the satellite is very heavy and is going into such a high orbit. The first stage simply won’t have enough fuel to do a boost back, entry, and landing burn, and as a result the stage will be unable to land without damage.

electron is going reusable too!!! they just anouce it , minutes ago on theyr youtube live!! theyr using some kind of parachute, that they will catch whit a chopper !!! its insane!

Living in South Florida makes black Tshirts difficult to wear. Have you thought about offering a white version of your T shirts?

“Expended” isn’t really a landing place. Will it crash into the ocean? Burn up? Space junk floating around for a few years?