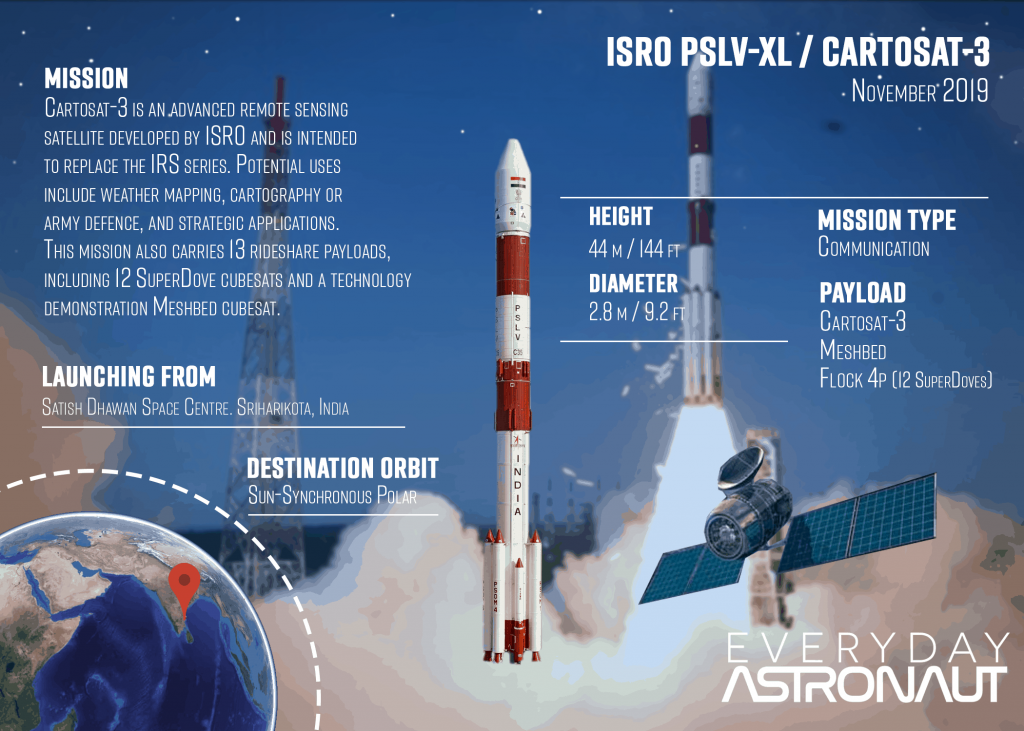 The Indian Space Research Organisation (ISRO) will be launching its Polar Satellite Launch Vehicle (PSLV) rocket on a mission primarily for itself from the First Launch Pad (FLP) at the Satish Dhawan Space Centre at Sriharikota in Andhra Pradesh state, India.

The PSLV program was developed to allow India to launch its Indian Remote Sensing (IRS) satellites into sun-synchronous orbits (SSO); this is a service that was only available as a commercial service from Russia, until the dawn of the PSLV in 1993. Also, the PSLV family of rockets can also launch small-size satellites, like CubeSats, into Geostationary Transfer Orbit (GTO).

If that wasn’t enough, the vehicle successfully launched two spacecraft – Chandrayaan-1 in 2008 and Mars Orbiter Spacecraft in 2013 – that later traveled to the Moon and Mars respectively!

The three payloads for this mission are:

Cartosat-3 is an Earth remote sensing (in other words, imaging) satellite, designed and built by ISRO itself.

Cartosat-3 is a much more capable satellite than its predecessor, Cartosat-2, as it has an optical resolution of 25 cm due to its larger 1.2 m optics. Cartosat-2 had a resolution of about 1 meter by comparison.

Meshbed is a 3U cubesat made by Analytical Space Inc. It’s an on-orbit demonstration satellite that will be testing a patented MITRE antenna that hopes to allow users on the ground to gain faster access to satellite data. (MITRE, a not-for-profit corporation, works through private-public partnerships and with federal R&D centers to drive innovations in defense, aviation, healthcare, cybersecurity and other areas in the USA’s critical infrastructure.)