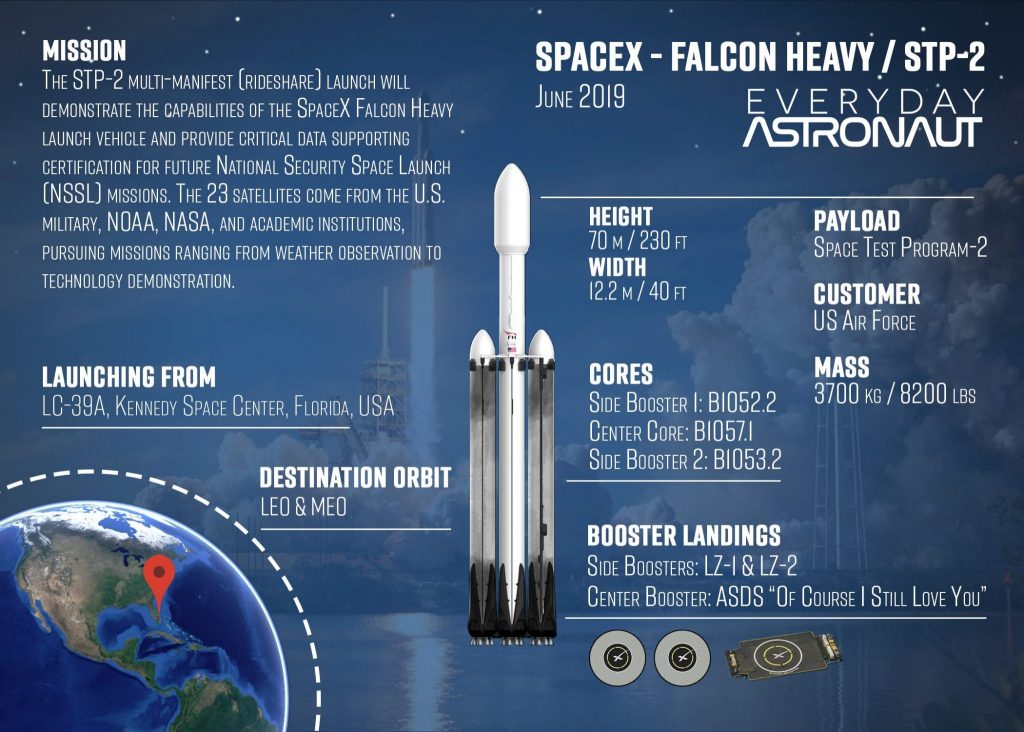 SpaceX will be launching the Space Test Program 2 (STP-2) rideshare mission for the U.S. Air Force’s Space and Missile Systems Center on a Falcon Heavy rocket. This Falcon Heavy is composed of a new block 5 center core (B1057) and the two block 5 side boosters (B1052 & B1053) from the Arabsat-6A mission.

The launch window for this mission opens at 11:30 PM EDT on June 24, 2019 and is 4 hours in duration. The Falcon Heavy will be lifting off from Launch Complex 39A (LC-39A) at the Kennedy Space Center in Florida. After burning for about 2 and a half minutes, the side boosters will separate from the core booster and boost back to the launch site for a landing at Landing Zones 1 & 2 (LZ-1 & LZ-2). The core booster will continue burning for another minute, before shutting down and separating from the second stage.  The core booster will be landing approximately 1,240 km (771 miles) downrange on Autonomous Spaceport Drone Ship, Of Course I Still Love You (OCISLY). 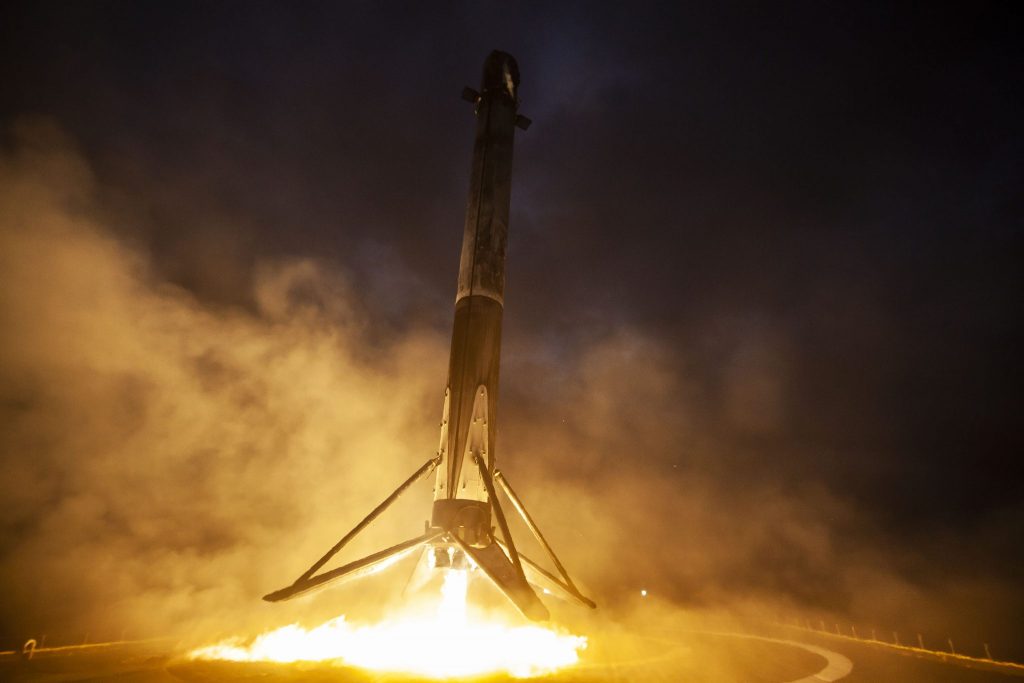 The second stage will be performing 4 burns during this 6 hour mission. Once reaching low Earth orbit, the first satellites to be deployed are Michigan Tech’s OCULUS-ASR nanosatellite and some cubesats.

Another burn will take the second stage into a medium Earth orbit. From there it will deploy the Air Force Research Laboratory’s Demonstration & Science Experiments (DSX) satellite. There are thirteen payloads onboard, arranged into three groups of experiments: the Wave Particle Interaction Experiment (WPIx), the Space Weather Experiments (SWx) and the Space Environment Effect (SFx).

Finally, after a three hour coast phase, the second stage will perform a final propulsive passivation maneuver. This is understood to be a release of the remaining propellants which will alter the second stage’s trajectory to speed up its orbital decay.

Damn, i tought falcon heavy was more of an infrequent launch vehicle, but they are slowly ramping it’s use up. Not that i mind at all.

I think this launch has been booked very long ago. just like the Arabsat launch.
but anyways this is very exciting ?

In fact I belive Elon has said that falcon heavy has been a significant challenge, and in retrospective maybe focusing on Starship/Superheavy since F9 development was completed maybe would have been a more cost-effective alternative. So I wouldn’t be surprised if falcon heavy is just cancelled once starship is flying.

Once the Starship / Superheavy is online, all other SpaceX vehicles won’t be used again

I think it will get more frequent as people come up with payloads that utilise its capacity.

I wonder will it prove cheaper for SpaceX to offer Falcon Heavy for payloads that Falcon 9 could handle only in expendable mode, such as GPS3 (although that will only be cheaper if they can actually catch the centre cores!).

Looks like this one will also have cremated remains taken to orbit, interestingly…$5k a pop and you too can get rid of your (dead?) relatives…

ok, the dirty side boosters from their previous landing in the infografic has just blown me. perfect, short and on-point information as always. Good Job!

Why use Falcon Heavy for such a light payload?

This is a demo mission for NSSL, so it’s not about as much payload as they can put but to show that they can send different types of sats into different orbits with FH