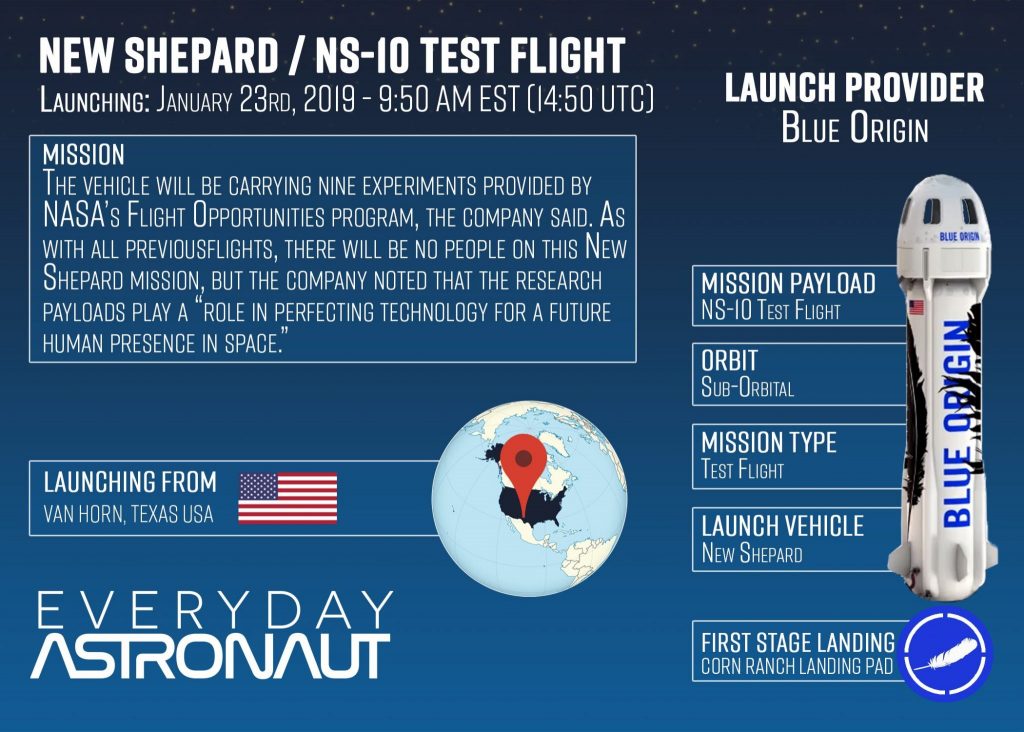 Blue Origin will be launching their New Shepherd rocket for the 10th time from their west Texas launch site. The New Shepherd is a 18.29 m (60 feet) suborbital vertical takeoff and landing rocket. The booster is powered by a hydrolox BE-3 engine.  The engine burns for about 2 minutes and 30 seconds, pushing rocket toward skyward the 100 km Karman Line. Following main engine cutoff, the capsule then separates from the booster and continues on its ballistic trajectory past the Karman Line. While there are no passengers on board this flight, if there were they could unbuckle from their seats and float around the cabin experiencing a few minutes of weightlessness before having to buckle back in for the capsule’s descent. After capsule separation, the booster descends back toward the launch site and restarts the BE-3 engine a few seconds before touchdown to perform a powered landing. The capsule descends under parachutes and retro rockets fire just before touchdown to cushion the landing.

This mission will include 9 NASA sponsored payloads as a part of the Flight Opportunities program.

Tim will be livestreaming this launch immediately after the launch of SpaceX’s Falcon 9 for the GPS III SV01 mission. So come ask questions and join the conversation live!

To Infinity and beyond. I’m told the real Buzz is planning a trip to the south pole. I hope he’s not pushing his luck !
I hope he stays away from the German/Alien hole 5 km away.

Well after what happened last time he might be

And when are they going to learn something about SI units? Yes, they go slowly so perhaps the 22nd century will be the right time …