Meet the Astronauts Launching From American Soil For the First Time in Nearly a Decade:

For the first time since the decommissioning of the Space Shuttle in 2011, American astronauts will launch to space aboard American-built rockets from American soil. America.

Now we know who those astronauts are.

The announcement was made today at NASA’s Johnson Space Center, in front of all the big shots – all of them. Before we even get to the Commercial Crew assignments, these were just some the people there for the event:

Administrator Bridenstine took the mic for the event’s keynote announcement. In front of a ~15ft tall archway adorned on top with NASA’s beloved meatball logo, with graphics of the ISS and Earth from space draped on each side, NASA brass and the SpaceX and Boeing Chiefs lined up for a handshake procession.

Building anticipation as he spoke for NASA’s version of the NFL Draft, Bridenstine introduced astronauts by mission, and gave background on each. Here’s the lineup:

NASA released an updated schedule for the first launches of its commercial crew program yesterday, with SpaceX’s uncrewed DM-1 launch planned for as early as this November. 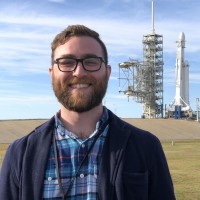