Evidence of a volcanic moon beyond our solar system!

In a far far away exo-planetary system astronomers found evidence of VOLCANIC activity on one of the Moons orbiting a Super Earth! Astronomers at the Physics Insitute of the University of Bern and the NCCR PlanetS, found evidence of volcanic activity around exoplanet WASP-49b. The volcanic activity measured were high altitude sodium gas levels, typically form warmer air and rocky bodies, however with the gas levels being higher altitudes than normal this means the sodium gas likely didn’t come only from the exoplanet bu from another source. The exoplanet produces winds which can be what causes sodium gas to be emitted and then measured by astronomers but the seem to be so far away from this exoplanet that there might be something else that it’s coming from…such as a MOON! 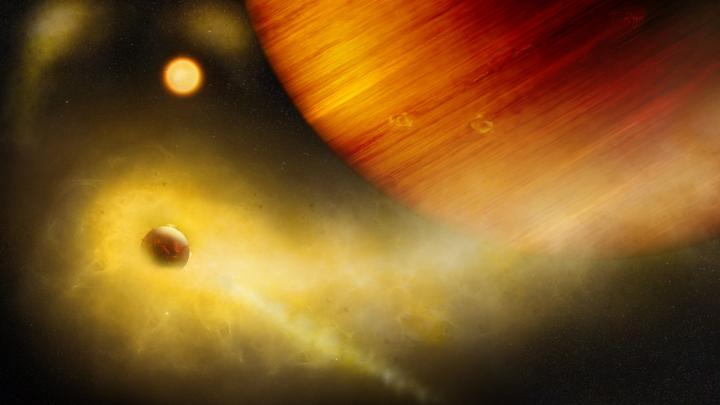 Taking a look at our own solar system we see a similar observation with planet Jupiter and its moon, Io. Io is known for volcanic activity and being very rocky.. that’s right I said volcanic aka there’s volcanoes on the moon of Jupiter, Io. Did you know that? Well, up until now this was the only moon we had record of to have volcanic activities but NOW this moon at WASP-49b may be the same! 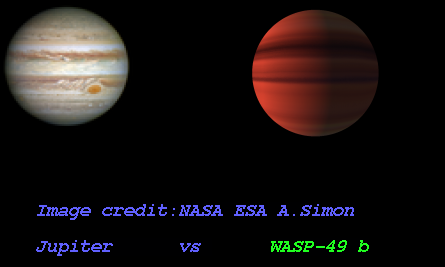 This 554.5 lightyear-away planet, WASP-49b, orbits a main sequence yellow dwarf star, and about 10 years ago astronomers at the University of Virginia and the late Patrick Huggins at New York University measured a balance in the tidal forces of the exoplanet and the sodium gas levels, hence allowing the exoplanet to remain stable. Seeing such high levels of sodium gas would typically mean extreme thermal evaporations of the planets atmosphere, but if there was some hidden moon present then that can explain the high gas levels.

Rocky moons especially when affected by strong tidal forces can heat up the moon making it volcanically active. A hot molten, lava surface can release higher amounts of sodium and potassium out into space than even a large gas planet. Does this mean there’s a hidden moon around this exoplanet? OR is there an ionized disc of gas around this exoplanet? Did astronomers find a an exomoon with volcanos? To me, this is valuable information for finding life beyond Earth and on other worlds beyond our very on solar system. Is there something else we should keeping a lookout for when it comes to rocky moons? Are these volcanic regions implications of new ways that life can form in exoplanets and their moons? And what can studying WASP-49b teach us about our own solar system? Planet Jupiter and its moon Io? The more we study the better and closer we will get to understanding our very own existence. 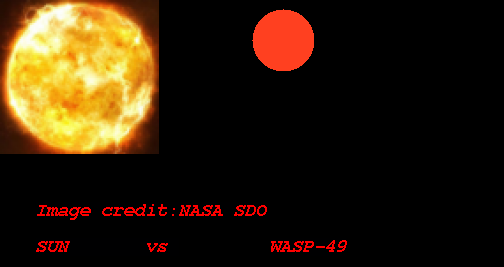 Love it! Although we can’t say for sure yet if this really is volcanic activity on an exomoon, the hypothesis is pretty striking. With Io, we know that a good bit of the sulfur material being erupted from that moon’s surface is moving fast enough to escape Io and enter into Jupiter’s magnetosphere, only to then get whipped around and slam into other moons. It’s likely that a lot of the sulfur that we’ve detected on Europa’s surface came from Io. If that sulfur is possibly being exchanged between the surface and the ocean deep below (perhaps through the lineae) then there is a real possibility that a Europan ocean biosphere might be partially fueled from sulfur from another world! That would be pretty cool (and something that Europa Clipper will help us to get a better handle on).