Electron | Running Out Of Fingers 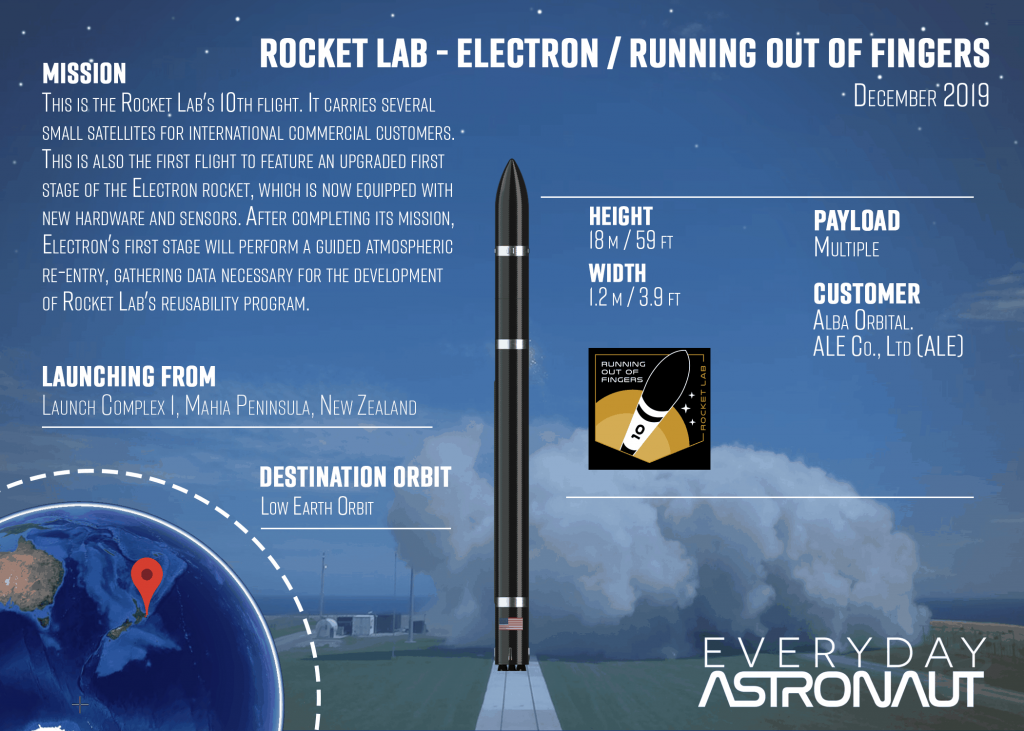 Rocket Lab will be launching its Electron rocket on a mission for Alba Orbital and ALE Co., Ltd (ALE), from Launch Complex 1 (LC-1) on the Mahia Peninsula in New Zealand. The 14-day launch window for this mission opens beginning on November 29th at 21:20 NZDT/08:20 UTC //3:20 a.m. EST

The six rideshare payloads for this mission are:

This will be Rocket Lab’s sixth orbital launch in 2019 and the tenth overall launch of the Electron rocket. This Electron rocket is named Running Out of Fingers.

This mission will be the first time that Rocket Lab tests recovery instrumentation onboard a flight. It will include guidance and navigation hardware, including S-band telemetry and onboard flight computer systems, to live-gather data during the first stage’s atmospheric re-entry, as well as a reaction control system to orient the booster. Even though no recovery will be attempted it is another step towards a fascinating new technique!

Tim Dodd, the Everyday Astronaut, will be live streaming this launch starting at T-minus 30 minutes. So come ask questions and join the conversation live! If you want the best way to know when a launch is coming, I’d suggest downloading the Next Spaceflight app to stay in the know!

Electron | Running Out Of FingersPrelaunch Preview

Will Rocketlab be giving the Electron a new name ?
Maybe Ev2
But then with all the changes they have made to the Electron so far it would be getting well into double digits

Does anyone know why the launch keeps getting delayed by two days?
It might have something to do with the wether or something simple like that.
If anyone knows that would be great!